"Number Eight" is one of the twelve humanoid Cylon models. She is the youngest in both fact and appearance and generally associated with the name "Sharon" when interacting with humans. Eights are known for being more empathic and compassionate than the other Cylons. Humans have particularly been exposed to two specific copies, Sharon "Boomer" Valerii, a "sleeper" agent who served on board Galactica believing herself to be one of the human crew while unknowingly programmed as a saboteur and assassin, and Sharon "Athena" Agathon, who was assigned to seduce Karl "Helo" Agathon on the planet Caprica, but fell in love with him and defected to the human side, replacing Boomer as a Colonial officer on Galactica. There are numerous other copies among the Cylon populace.

Sharon "Boomer" Valerii is a copy initially planted as a "sleeper" agent in the Colonial Fleet. Implanted with false memories, she is unaware of her Cylon nature and serves for two years as Lieutenant Valerii on Galactica, where she is assigned as a Raptor pilot and also engaged in a secret relationship with Chief Tyrol. After the Cylon attack, her underlying programming repeatedly emerges which leads her to unconscious acts of sabotage. Growing confusion about her true self results in a deep depression and a failed suicide attempt. After Valerii returns from a successful mission to destroy a Cylon basestar, she shoots Commander Adama in the chest, wounding him critically. She is incarcerated in the brig and is shot and killed by Specialist Cally while being moved to a specially-built holding cell. 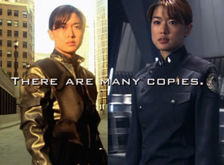 Her consciousness is downloaded and she is reborn in another body. Subsequently, she experiences severe problems integrating into Cylon society and long considers herself more human than Cylon. She eventually works together with Caprica-Six in an attempt to change Cylon popular opinion about humans and she emerges as one of the Cylon leaders jointly responsible for the end of the occupation of the Twelve Colonies and later the Cylon occupation on New Caprica. Following the failure on New Caprica, Valerii abandons her hopes for coexistence with humans and she denounces her past on Galactica.

Later she sides with Cavil in the Cylon Civil War and is the only Eight on his side. She is in a physical relationship with Cavil, and is even aware of the identities of the Final Five and that Ellen Tigh is being held prisoner within the Cylon fleet. She appears to defect and helps Ellen escape, but it's part of a successful plan to kidnap Hera Agathon, the daughter of the Eight called Athena. Boomer is put in the brig upon her arrival on Galactica despite her rescue of Ellen, but escapes by manipulating the emotions of her old lover Galen Tyrol. She tells Tyrol that despite everything, she still loves him and thinks about him often, even creating a projection of their dream home and a daughter for them. Knowing that the rebel Cylons plan to try and execute Boomer for betraying them, Tyrol knocks out another Eight and switches her with Boomer. Boomer then assaults and switches places with Athena, and kidnaps Hera so that she can be studied on The Colony. She seems to show some remorse for kidnapping Hera, who she bonds with on the trip to The Colony, and is the only one of Cavil's faction who shows her any compassion. Boomer gives Hera back to Athena and Helo during the Battle of The Colony, saying that she owed Admiral Adama a favor and she has made what was probably her last choice. Boomer is then shot and killed by Athena. With the Resurrection Hub destroyed, Boomer's death was final.

Sharon "Athena" Agathon is a copy first encountered by Karl "Helo" Agathon, when he is stranded on Caprica. She is initially assigned to seduce him by impersonating Lieutenant Sharon Valerii, as part of a Cylon cross-breeding experiment. To facilitate her mission, this Sharon was given Boomer's memories at least up until the point of leaving Helo behind on Caprica. Unlike Boomer, she is always aware of being a Cylon. Sharon later turns against her people and helps Agathon escape the planet; pregnant with his child during that time. Helo, first shocked by her true nature, ultimately accepts her as the mother of his child and declares his love for her.

Once on Galactica, she is imprisoned in the cell built for Boomer and long seen as nothing but a "toaster". She frequently provides intelligence and earns Admiral Adama's trust by helping the Colonial Fleet escape peril several times. Sharon gives birth on Galactica to a daughter named Hera, but President Roslin considers the Cylons' interest in the baby a threat to the Fleet and so has Doctor Cottle fake the child's death and give her to a foster mother. Sharon eventually marries Karl Agathon and becomes a Colonial Raptor pilot with the callsign "Athena". She believes Hera to be dead for more than a year, unaware of her presence on New Caprica or her recovery by the Cylons during the exodus from that planet. After learning the truth during a confrontation with Sharon Valerii, Athena is able to regain her daughter from the Cylons with the help of Caprica-Six.

Since her joining the Fleet she has become a trusted officer who is assigned the hardest of missions, at least one which being a Cylon helped her survive when it would be difficult for normal humans (TRS: "The Passage"). She tells Helo at one point that she has to struggle to be accepted everyday because of her true nature as a Cylon, but despite that she remains loyal to the Fleet. When she learns that the Colonials plan to wipe out the whole Cylon fleet by unleashing the lymphocytic encephalitis virus, she says that she will keep her word nonetheless even if it means she's the last Cylon in existence. At one point she encounters several other Eight copies on the Rebel Basestar, who revere her since she was the first Cylon to say "no" to the overall plan and now has a child and a place among the humans. They ask her to lead a mutiny against Natalie and the other Sixes, whose leadership they blame for their current troubles; however, Athena refuses, saying that the other Eights disgust her. She explains that they should choose which side they are on and not cut and run when things get ugly, or else they'll never achieve any of the things they want for themselves.

Athena later is severely beaten by Boomer and locked, half-conscious, in one of the ship's bathroom stalls, having to watch as Boomer seduces Helo. Athena frees herself too late to prevent Boomer from kidnapping Hera. Athena seems to fall into a depression, basically ignoring her husband and stating that she doesn't think they'll find Hera alive even when a rescue is finally launched for her. Athena is part of the strike team that invades The Colony through Raptors and finds that Boomer has saved her daughter from dissection. Boomer returns Hera to her, but Athena refuses to forgive Boomer, saying that returning Hera doesn't absolve Boomer's various betrayals. Boomer agrees. Athena then shoots and kills Boomer for her actions. Athena, Helo, and Hera survive the Battle of The Colony and settle on the new Earth to live out the rest of their days in peace. 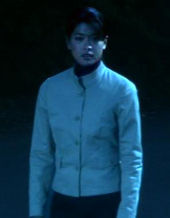 A Number Eight copy at the Delphi spaceport.

Eights onboard a Cylon basestar.