For other uses of this name in 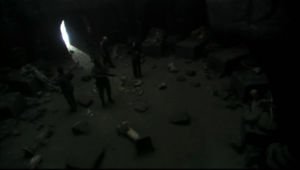 The tomb's interior with ruined statues of the twelve tribes.

The Tomb of Athena is presumably the final resting place of Athena, Lord of Kobol after her grief-stricken plunge from the Gates of Hera. It is unclear who interred her, since her death apparently took place after the exodus of the thirteen tribes from Kobol.

The tomb is located in the northern hemisphere, a few days hike from the Galleon Meadow, near the Gates of Hera, to the west of the ruins of the City of the Gods. According to the Sacred Scrolls, the tomb could only be opened with the Arrow of Apollo. Entrance to the Tomb of Athena, as seen from outside.

The Arrow is not a key to the tomb's actual door, however. While the exterior door to the tomb can be opened by brute force, the Arrow is required for something else. The tomb contains twelve stone sarcophagi arranged in a circle, each with ancient statues representing one of the Twelve Tribes which went on to found the Twelve Colonies. Picon was represented by a fish; Caprica, a goat; Sagittaron, an archer, and so on.

"The scriptures say that when the thirteenth tribe landed on Earth, they looked up into the heavens and they saw their twelve brothers."

Kara Thrace places the Arrow in the bow of the Archer of Sagittaron. Immediately the Tomb's entrance closes, leaving those in the Tomb in darkness. After a few seconds, they find themselves in a grassy field at nighttime surrounded by twelve megalithic slabs[1], either physically transported or immersed in a very sophisticated hologram.

On each column is the ancient symbol of a colony as used on their respective old Colonial flags. Roslin notes that the symbols were used back when the ancient names of the Colonies were used: Aries instead of Aerelon, Taurus for Tauron, Gemini for Gemenon, and so on.

Above the group, the night sky shows constellations, each representing a colony. In fact, Thrace realizes that, according to the scriptures, that they were all standing on a representation of Earth, seeing what their comrades on Earth would see. The map information, however, was incomplete without one more stellar reference that Lee Adama finds in the Scorpius constellation: the Lagoon Nebula, an object visible on Earth and known as well to the Twelve Colonies. Lee Adama deduces that as they approached this point, the ship would be able to further define their position to Earth. Commander Adama notes that the nebula was "a long way away from here" (TRS: "Home, Part II").

The group is not shown leaving the hologram or the Tomb. It can presumed that the group walks beyond the stones and the image fades to their actual location in the Tomb, then reopens the entrance - either by forcing it open once again or retrieving the Arrow - and exits. 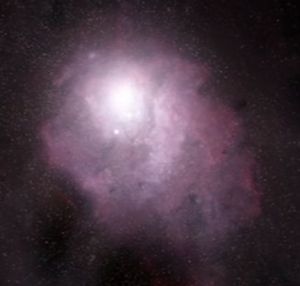 The Lagoon Nebula in the constellation Scorpius.

Is there anything you wish you could change?

Grazier: There’s two. There’s one that I recognized too late. That was when the explosion in "Water" blew out the side of the [Galactica] and we have a big venting of water. [Galactica] was connected to the Virgon Express. That would have imparted a pretty healthy delta v [change in velocity], meaning it would have yanked the Virgon Express with [Galactica] and probably broken the water lines. I didn’t think of that until too late, and I called and said “hang on!” and they said “that ship’s sailed, sorry.” That was the second episode and I was a baby science advisor then. The other one is I wish I would have been more insistent with the constellations in Home, Part II. Because when you start thinking about those constellations, who put them there? Wasn’t the Kobolians. Those aren’t seen from the original Earth, so where did those constellations come from?

Those constellations were a big part of why was I sure the show had to be set in the future!

Grazier: Right. I wish I had been more insistent on “we really need to rethink this.”

The Tomb discrepancy is clearly due to continuity drift, as the finale had not yet been written when "Home, Part II" was penned. It remains unexplained who created or altered the star map to show the stars of our Earth as, as Grazier points out, it cannot have been the tribes of Kobol who did so. There is, however, nothing in the show that directly contradicts the possibility of some unknown agency being able to do this.

In addition, Gaeta comments in "Revelations" that the constellations seen from orbit of the Earth they'd just found match those seen in the Tomb of Athena. This means either that the two Earths were close enough that constellations looked similar (and did not change drastically over 150,000 years) or that some of the star patterns as seen from the two planets in different parts of the galaxy and different eras were coincidentally similar.