During the opening salvos of the Cylon attack on the Scorpion Fleet Shipyards, Hoshi is showing Lieutenant Kendra Shaw to her quarters and explaining the basics of the ship's computer network to her before he is knocked unconscious when Pegasus is hit. He is later seen back on duty in the CIC when Cain announces the colonies' destruction to the crew. He is also there when Shaw orders the security camera feed pulled up, revealing a dead Number Six and unmasking Gina Inviere as a Cylon agent (TRS: "Razor").

Hoshi handles the wireless traffic between Pegasus and her Vipers during the stand-off between the two battlestars (TRS: "Pegasus"), and between Pegasus and the strike team during the attack on the Guardian basestar, where he also reports the damage control status. He also mans the nuclear launch key station when Commander Lee Adama prepares a nuclear strike on the basestar (TRS: Razor).

With the settlement of New Caprica, Hoshi remains on Pegasus and is serving in the CIC when the Cylons arrive and force the remaining Fleet to abandon the colony (TRS: "Occupation"). After the destruction of Pegasus, Hoshi is assigned to Galactica's CIC (TRS: "The Passage").

During a standoff with the Cylons above the algae planet, Admiral William Adama orders Hoshi to arm missile tubes 4 through 10, threatening to destroy the Temple of Five (TRS: "The Eye of Jupiter") with nuclear warheads.

Hoshi takes over Lieutenant Felix Gaeta's duties when Gaeta joins Captain Kara Thrace's search for Earth aboard the Demetrius. When the Cylon rebel basestar found by the Demetrius jumps to the Fleet without her, he relays Admiral Adama's order to the Fleet to make an emergency jump and announces when the main batteries have acquired a firing solution on the baseship (TRS: Guess What's Coming to Dinner?). 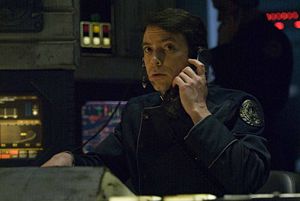 Hoshi is revealed to be in a romantic relationship with Felix Gaeta. When the Gaeta's Raptor goes missing en route to the Zephyr, Hoshi and Margaret "Racetrack" Edmondson mount a SAR mission to find him, which they eventually do. Once back aboard Galactica, Gaeta ends their relationship in order to protect Hoshi from any repercussions from his meeting with Admiral Adama (TRS: "The Face of the Enemy"). Gaeta actually planned a mutiny, which Hoshi is unaware of. Gaeta arranges sabotages, which Hoshi thought were just glitches on Galactica's old systems. After Gaeta announces that he is relieving Adama of command, Hoshi is taken away by a mutinying marine (TRS: "The Oath").

Despite volunteering for the mission to rescue Hera from The Colony, he is appointed Admiral by Adama should they not return with the child. He leaves on the last Raptor out and is saluted by the crew before he goes. Later, he is seen on the new planet with Cottle, Tigh, Lee, and Adama watching the natives. He returns the Admiral stars to Adama, saying that they were "too heavy", and that the happiest day of his life was when he saw Adama get out of that Raptor, echoing a statement Roslin made to Adama back in Resurrection Ship, Part I in regards to the return of Admiral Helena Cain (TRS: "Daybreak, Part II"). He participates in the planning for life on the new Earth with Romo Lampkin and Lee Adama.