Admiral Helena Cain hails from the colony of Tauron, and is the commanding officer of the Mercury-class battlestar Pegasus at the time of the Fall of the Twelve Colonies. She is a hard leader, unafraid of making difficult decisions and unflinching in her will to do what she sees as right. These traits sometimes compel her to feel that she has been left no choice but to take controversial, unpopular, and morally questionable choices.

Helena Cain was born during the first Cylon War. On the last day of the war, Tauron was under attack by Cylon basestars and Centurion ground forces. Her sister Lucy Cain and her father were pinned down in a building under heavy fire. When her father was injured trying to escape, he told Helena to get Lucy to a shelter, before dying. The two made it out of the building, as a result of panic and likely injury Lucy had sustained when she tripped over some broken concrete, Helena left her in a field of rubble and ran away to hide in a container. While in the container, she found a folding knife, and when she was cornered by a Cylon centurion, she pulled the knife and demanded that the Cylon either attack or leave. Much to her shock the Cylon stopped, turned around and left the container. When Cain came out again after the Cylons retreated, she found only her sister's doll on the ground (TRS: "Razor", extended version). These traumatic events were formative for her future. 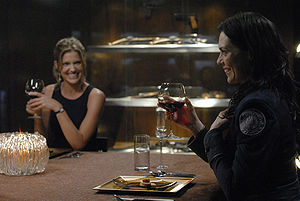 When Pegasus is scheduled for an extensive overhaul at the Scorpion Fleet Shipyards, Cain has regular meetings with Gina Inviere, a civilian contractor working for the Colonial Ministry of Defense, to work out the details of the retrofit. The two eventually become romantically involved.

Shortly before the Cylon attack, Lieutenant Kendra Shaw is assigned to the battlestar as Cain's personal aide. When the lieutenant fails to make it to CIC immediately after her arrival, Cain chews her out in front of the crew, but breaks into laughter after Shaw leaves, showing that she isn't always as hard as she appears to be.

When the Cylons attack the shipyards, Cain is in her quarters, working out and going over efficiency reports. She makes it to CIC and immediately orders the battlestar unmoored. When the navigational computer is discovered to be offline and nuclear missiles are inbound, Cain orders a blind jump to escape certain destruction. With many of her crew dead and the destruction of the Twelve Colonies confirmed, she uses the Pegasus public address to inform the survivors while vowing to take revenge on the Cylons. However, in a private dinner with her XO Jurgen Belzen, Jack Fisk, Inviere and Shaw, she promises that she has no intention to unnecessarily waste lives or resources in an emotional quest for revenge.

Shortly later, a Cylon communications relay is detected, which the crew believes to be an easy target. On arrival, one squadron of Vipers is launched. However, 15 squadrons of Raiders suddenly appear because, it turns out, the target is actually a Cylon staging area. XO Belzen urges Cain to recover their Vipers and retreat, but instead she seemingly forgets her earlier promise and orders the launch of all remaining fighters, which Belzen refuses to do in the face of such odds. Cain asks the XO for his side arm, and shoots him in the head with it in front of the crew. She then turned to Fisk, promotes him to XO, and orders him to launch the rest of the Vipers. Fearing for his life, he does so. At the same time, Inviere disables the main gun batteries and allows a group of Cylon Centurions to board the ship, causing many deaths. Shaw reveals her as a Cylon agent in CIC and Cain orders her arrest. Inviere kills two marines and aims a gun at the helpless Cain, but hesitates to shoot her, showing that perhaps the Cylon's feelings for Cain are real. Before Inviere can make up her mind, Shaw knocks her out. Pegasus manages to win the battle, but with staggering losses.

Cain is deeply stung by Inviere's betrayal, her feelings toward her erstwhile lover turned into hatred and scorn. Cain gives Alastair Thorne free rein in interrogating the Cylon for information, suggesting "pain ... degradation, fear, shame." This sets the tone for the interrogations, ultimately leading to measures such as gang rape.

When Pegasus happens upon a small civilian flotilla, Admiral Cain decides to strip it of resources and personnel, including their FTL drives. The civilians, however, refuse the cooperate. Resistance is particularly vocal on the Scylla. When a boarding team led by Shaw and Fisk fails to make the civilians cooperate, Cain orders the team to shoot the families of every conscript who refuses to obey. Shaw fires the first shot and eventually 10 people are killed, thus breaking the resistance. Cain is very impressed by Shaw's actions in the civilian standoff and promotes her to the rank of captain, explaining that Shaw has the qualities of a "razor"; someone who is able to shut down all emotions and inhibitions in battle in order to survive.

Despite the impossible odds, Cain intends to sustain a campaign of guerrilla warfare against the occupying Cylon forces. She then led the battlestar away from the Twelve Colonies, following a Cylon fleet that trails what they discovered as the fellow battlestar Galactica (TRS: "Razor", "Pegasus"). 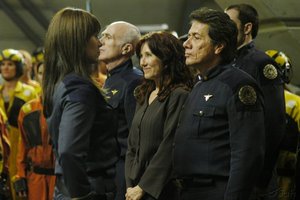 Admiral Cain, meeting up with the crew of Galactica.

Upon meeting up with Commander William Adama's Fleet six months later, she as ranking officer assumes command and transfers personnel from Galactica to Pegasus, including Lee Adama and Kara Thrace, indicating that Adama has let military discipline become too lax. Cain is more interested in fighting the Cylons, seemingly oblivious to the point that she and the ships around her are all that was left of the human race, whose survival is more paramount than offensive assaults. While Adama initially welcomes such attacks against a mysterious Cylon force that followed the Fleet (to stop it from following them), his attitude begins to cool about Cain's very strict and unmerciful leadership.

Cain's actions also raise concerns with President Laura Roslin. Cain recognizes Roslin and her former role as Secretary of Education. After the Fleet command transfer from Adama to Cain, Roslin makes several attempts to call Cain to request supplies for the civilian fleet, but all of Roslin's calls are ignored.

After the fatal assault of one of her crew members, Lieutenant Thorne, Cain arrests Chief Tyrol and Lieutenant Karl Agathon and has them flown to Pegasus, against Adama's protests, since traditionally a trial is held on the ship where an incident has occurred. Cain uses Galactica's logs against Adama when he asks for a tribunal; Cain notes that Adama dismissed the last council unilaterally when the verdict did not suit him. Cain summarily court-martials the prisoners herself in a matter of hours, sentencing them to death. A displeased Commander Adama orders an assault crew to Pegasus to bring his men back. Cain responds by deploying her squadrons of advanced Viper Mark VIIs against Adama's museum collection of Viper Mark IIs in a tense standoff (TRS: "Pegasus").

The tense situation is ended by a sudden appearance by Starbuck, flying the Blackbird as she returns from her unofficial recon mission on the unknown Cylon ship. Starbuck transmits the pictures she took of the Resurrection Ship back to Pegasus's CIC. Upon Thrace's return to Pegasus, Cain is so impressed with her performance that she promotes Thrace to Captain and Pegasus CAG, replacing the competent but uncreative and inflexible Captain Taylor. Cain tasks Starbuck with planning the joint strike on the Resurrection Ship.

Attack on the Resurrection Ship 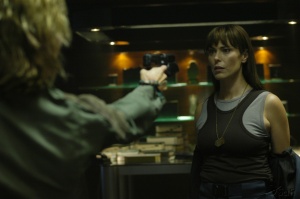 Admiral Cain held at gun-point by her Cylon prisoner.

After Captain Thrace briefs both Adama, Apollo, and Cain on her plan to attack the Resurrection Ship, Adama pulls Starbuck aside and outlines a plan to assassinate Cain following the attack. At the same time, Cain instructs Jack Fisk to lead a detachment of marines to "terminate Adama's command" after the battle (TRS: "Resurrection Ship, Part I").

When the moment arrives, both commanders back down from their assassination plots, to the relief of Thrace and Fisk.

Shortly afterwards, Cain returns to her quarters and is surprised to find Gina Inviere, who escaped her cell with the aid of Baltar, waiting for her. After a tense confrontation, Gina kills Cain with a shot to the head.

Cain is given a funeral with full military honors. Fisk and Thrace eulogize her; Fisk promises to command Pegasus in the same spirit as she did, and Thrace says that while she knew Cain only briefly, she admired her, and that "We were safer with her than we are without." (TRS: "Resurrection Ship, Part II"). Several months later, Adama tells his son that he can't find any faults in Cain's tactical decisions, and refuses to pass judgment on her, because he had people who kept him from going down a similar path, and never had to go through the situations Cain had to face (TRS: "Razor").

Adama abandons his assassination plan because of something that was pointed out in a private conversation with the second copy of Sharon Valerii, who reminded him that during his decommissioning speech he had asked whether humanity asked itself if it deserved to survive (TRS: "Miniseries, Night 1"). Turning on each other would have proven that the Cylons were correct about humanity.

Cain's reasons for calling off her plan were never revealed, and remain a topic of debate among fans.