This article discusses the living computer of a Re-imagined Series basestar. For information on the Cylon-human hybrid child, see Hera Agathon.

A Hybrid is an entity that represents the first step in the Cylon evolution from pure machines to organic beings (TRS: "Razor). They serve as the central computers of basestars (TRS: "Torn") and of larger Cylon facilities, such as the Colony.

The Hybrids resemble human beings inside an immersion tank similar to a Cylon rebirthing tank. However, they are not humanoid Cylons, but another type of Cylon, similar to the autonomous bio-mechanical Raiders [1], specially constructed as living computers that manage the autonomous functions of the basestar, including navigation, propulsion (especially faster-than-light) and climate control. The Hybrids are so integrated into the functionality of the basestars that they are the basestars, for all practical purposes. The Hybrids may also be in contact with the Centurions and possibly the Raiders, as an Eight notes that - when a basestar became infected with a biological virus - the Centurions started shutting down as soon as the Hybrid became infected (TRS: "Torn").

The Hybrids do not have a completely human body, but rather appear to be more like cyborgs, consisting of conduits and other connectors mated to, or in place of elements of their bodies.

The Cylons created the first Hybrid from abducted human civilians on whom they conducted medical experiments during the first Cylon War. This Hybrid had the appearance of an old man, whereas later Hybrids resemble young women. According to Sharon Agathon, the experiment (the first Hybrid) was deemed to be an evolutionary dead-end and was abandoned after other Hybrids were created to control the baseships (TRS: "Razor", "Razor Flashbacks") [2].

It appears that a council of seven humanoid Cylons, each representing their particular model and located elsewhere in the basestar's command and control center, generate the collective command decisions that are accepted and executed by the Hybrids. In addition to articulating disagreement with orders, a Hybrid can take autonomous actions on its own, as shown when the Rebel basestar's Hybrid unilaterally engaged its FTL drives, separating all aboard from the Colonial Fleet. (TRS: "Guess What's Coming to Dinner?") 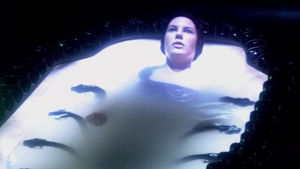 The Hybrids almost continually speak in phrases that make little sense to the basestar's crew. The utterances appear to be a mixture of system status reports as well as observations of events in and around the basestar that may not be describable in words. Leoben Conoy believes that the Hybrids can hear or understand the voice of God. A Number Three suggests that the Hybrids have seen the place "between life and death" and have been driven mad as a result (TRS: "Rapture").

A Hybrid's connectivity to its basestar provides it with a remarkable awareness of the surrounding space. They appear to experience a form of ecstasy, perhaps at an orgasmic level, when accomplishing certain tasks such as FTL jumps.

Hybrids have conscious states in which can converse, if only briefly. When Gaius Baltar reaches into the Hybrid's tank and attempts to grab her hand to ask about the missing five humanoid Cylons, the Hybrid grabs him from the arm and looks directly at him, recognizing him as a being with intelligence. She coherently tells him a riddle before returning to her usual speech pattern and catatonia. The copy of Number Three initially objects to touching the Hybrid, suggesting that humanoid Cylons may find physical contact with the Hybrid to be distasteful, dangerous, or a type of taboo (TRS: "The Passage").

The Hybrid can be disconnected from the basestar, but this is dangerous to it. Moments before deactivating, the rebel basestar's Hybrid delivers an uncharacteristically cogent message to Kara Thrace concerning the dying leader and the Opera House (TRS: "Faith"). On hearing about this Laura Roslin ventures to the rebel basestar to try and talk to the Hybrid. At her bequest the Hybrid is plugged back in, but it immediately jumps the basestar away. Roslin attempts to communicate with the Hybrid, but has little success. Baltar also attempts, claiming a spiritual affinity with the being, but is met with a similar barrage of incomprehensible babble (TRS: "The Hub").

This rebel Hybrid appears to exercise greater autonomy than as previously encountered, repeatedly jumping the ship without command. Notably, this Hybrid is instantly aware of the shooting of Natalie and the re-activation of a Number Three, events which do not take place upon its ship.

Under special circumstances, humanoid Cylons may possess the ability to become Hybrids of a sort themselves. After suffering severe brain damage from a gunshot wound to the head, Samuel Anders is placed into a Hybrid tank and connected to the datastream in an attempt to "reboot" his brain. As a result, he takes on the role of the Hybrid of Galactica, with the ability to control the ship's systems through Cylon organic resin and speaking in the way a typical Hybrid would (TRS: "Someone to Watch Over Me").

During the Battle of the Colony, Anders is able to distract the multiple Hybrids controlling the Colony, shutting down the Colony's ability to fight. The Colony Hybrids are later involved in an information transfer from the Final Five to the Colony of the specifications for resurrection technology, and are sent into distress when Galen Tyrol interrupts the transfer. The Colony Hybrids perish when the structure falls into a black hole. After Anders pilots Galactica and its fleet into the sun of a previously unknown planet, only the rebel Hybrid and the Hybrids aboard any surviving basestars in the galaxy remain (TRS: "Daybreak, Part II"). 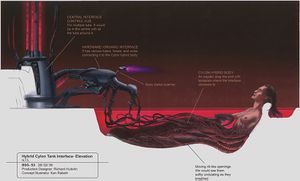