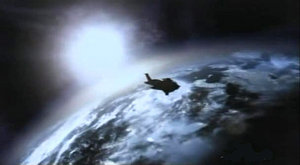 New Caprica, as seen from space.

New Caprica is a cold, barely habitable world discovered and colonized by the Fleet of human survivors escaping the Fall of the Twelve Colonies. Located within a nebula that significantly hinders DRADIS abilities, the planet is seen as a safe haven from the marauding Cylon enemy. It is only after the luxury liner Cloud 9 is destroyed in a nuclear explosion that the Cylons detect the resulting radiation signature and track it to New Caprica, where an unprepared military and civilian population awaits. Four months after the Cylon occupation of New Caprica, the remaining Colonial military attempts to liberate the colony, leading to the Battle of New Caprica.

Lt. Margaret "Racetrack" Edmondson discovers the planet later known as New Caprica after her Raptor accidentally jumps to the wrong coordinates while on a rescue mission to Caprica. Ground surveys reveal that New Caprica is a cold world with a harsh climate, and that only about twenty percent of the surface - a small temperate band around the equator - is habitable. The planet is located in a system enshrouded by a dense nebula that renders DRADIS all but useless. This makes the planet strategically appealing; theoretically, it would protect a settlement from Cylon detection indefinitely.

Excited by her discovery, Racetrack returns to the battlestar Pegasus with sensor readings she has gathered. The mere prospect of setting foot on a planet causes great debate within the human Fleet, quickly dividing it into two factions: those who wish to stop running from the Cylons and colonize the planet, and those who want to continue their search for Earth (TRS: "Lay Down Your Burdens, Part I").

Given the harsh climate of the planet, President Laura Roslin writes off colonization as unrealistic. However, the discovery of New Caprica happens to coincide with an impending presidential election (TRS: "Lay Down Your Burdens, Part I"). Presidential candidate Gaius Baltar and running mate Tom Zarek seize upon colonization as their wedge issue, offering the Fleet the prospect of settlement under the presumption that the Cylons will be unable to penetrate the nebula. Roslin disagrees with this assessment, but the majority of the travel- and war-weary survivors of the Fleet find the idea of colonizing the planet favorable. Baltar and Zarek win a decisive mandate, and Roslin is voted out of office. President Baltar's first executive order is to begin settlement, bringing an end to the Fleet's search for Earth.

Shortly after Baltar's inauguration, a nuclear warhead smuggled onto Cloud 9 is detonated, destroying it and several other ships orbiting New Caprica. The incident proves to have a devastating impact on the human settlers one year later (TRS: "Lay Down Your Burdens, Part II"). 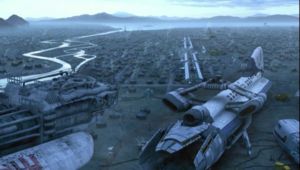 The population of New Caprica is concentrated in a small settlement called New Caprica City. The climate proves unforgiving, and there are major shortages of medical supplies and basic living materials. Most of the 39,192 settlers continue to live in canvas tents, with the rest using grounded ships for shelter. Many, including Galen Tyrol and the workers' union which he leads, blame President Baltar and his lack of leadership for the majority of economic and social problems facing the settlers.

Three hundred and eighty days after settlement, Cylon forces over a light year away discover New Caprica after detecting the radiation signature of the nuclear warhead detonated on Cloud 9 and tracing it back to its source. The Cylons jump into New Caprica's orbit with a fleet of basestars and descend upon the settlement. The battlestars Galactica and Pegasus are caught by surprise and are vastly outnumbered. With both ships at a fraction of their full crew strength, Commander Lee Adama persuades Admiral William Adama to escape along with two thousand humans (TRS: "Occupation") aboard the few civilian ships still orbiting the planet.

On New Caprica, President Baltar is confronted by a Cylon delegation in his office aboard Colonial One. Left with no choice, Baltar surrenders to the Cylons (TRS: "Lay Down Your Burdens, Part II"). 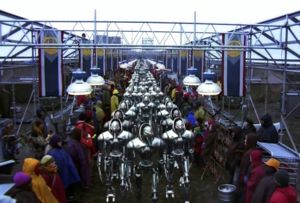 The Cylon forces are initially led by Caprica Six and Boomer with the sincere intention of establishing peace between the Cylons and the human race. However, they quickly lose their influence to the more militaristic Cylon models (TRS: "Precipice", "Exodus, Part II"). The Cylons become an occupying force on New Caprica, with President Baltar and his staff reduced to a puppet administration. Vice President Tom Zarek refuses to cooperate from the start of the occupation and is immediately sent to a detention center (TRS: "Precipice").

A band of human resistance fighters regarded by the Cylon occupiers as insurgents begin to strike back. Ironically the three resistance leaders are three of the Final Five Cylons. The resistance is significantly aided by an unknown inside source that passes them classified information from the Cylon government, allowing the resistance to wreak considerable havoc on the occupying force. In turn, the Cylons establish the New Caprica Police (NCP), a group of human volunteers who work for the Cylon authority to establish order within the colony. Considered to be collaborators, the NCP is regarded with both disgust and disdain by the majority of the New Caprica’s human population. This forces members of the NCP to wear black masks that conceal their identity, and protect them and their families from potential reprisals.

The Battle of New Caprica and the Second Exodus

New Caprica during its liberation.

Based on a contingency plan developed prior to colonization by Saul Tigh and William Adama, a Raptor regularly jumps into the nebula surrounding New Caprica in an attempt to contact the humans left behind. Four months after the start of the occupation, contact with the resistance movement is established. Admiral Adama and his military personnel devise a plan to evacuate the human population. However, the plan's success hinges on the retrieval of the planet-bound ships' launch keys. Confiscated by the Cylons, these keys are necessary to activate the FTL drives on the grounded ships.

Admiral Adama deploys a team led by newly commissioned Sharon Agathon that covertly lands on New Caprica in order to coordinate with the resistance. Agathon is also able to locate and retrieve the hidden launch keys. With the evacuation plan under way, Galactica jumps into the nebula, leaving Pegasus behind to protect the free civilian fleet and continue the search for Earth if the plan fails. Raptors launched from Galactica deploy decoys, creating illusory targets that trick the Cylons into believing they are chasing two battlestars, scattering the basestars. The admiral takes advantage of the confusion by jumping Galactica directly into New Caprica's lower atmosphere, deploying Blue Squadron and then jumping back into higher orbit. With Blue Squadron providing air cover, resistance fighters who have been attacking Cylon ground forces liberate the New Caprica Detention Center and escort civilians to their designated ships. One by one, the ships begin to launch and jump to the rendezvous point.

Back in orbit above New Caprica, a heavily damaged Galactica is surrounded by four basestars. With its FTL drive offline and without enough time to fix it, the basestars pummel Galactica - until his son, having ignored his father's order to stay behind, arrives with Pegasus, destroys a basestar, and diverts the remaining Cylon attackers. The crew of Galactica hurriedly brings their FTL drive back online, gathers the ship's Viper squadron, and jumps away. Having left its own Vipers to guard the civilian ships at the rendezvous point, Pegasus has no fighter cover and succumbs to the Cylon assault. Commander Adama and his skeleton crew are forced to abandon ship. Seconds after they escape, Pegasus collides with a second basestar, obliterating both vessels, and inadvertently destroys a third that is struck by debris from the battlestar (TRS: "Exodus, Part I", "Exodus, Part II").

Although the rescue mission is considered a success, approximately two thousand humans die during the escape and the preceding four-month occupation.[1] Among the dead are Tucker "Duck" Clellan, one of Galactica's Viper pilots, who is driven to despair by the murder of his partner (TRS: "Battlestar Galactica: The Resistance") and conducts a suicide attack on the NCP (TRS: "Occupation"); Ellen Tigh, who is poisoned by her husband Saul Tigh for collaborating with the Cylons; and Maya, who is killed while attempting to board an escape ship with her adopted baby daughter, the human/Cylon hybrid Hera Agathon.

Hera survives, but without the protection of her mother, she is left behind and recovered by the Cylons. With the humans gone and the child Hera in their possession, the Cylons see no logical reason to remain on the planet. Knowing he cannot escape with the rest of the human population, President Baltar elects to leave with the Cylons, at the invitation of the Number Three copy D'Anna Biers.

Valuable equipment and supplies are left on the planet in the evacuation, along with several ships. This forces Galactica to take on civilians to help alleviate cramped conditions within the Fleet. With Pegasus destroyed, Galactica once again becomes the Fleet's only protection. The damage endured by Galactica is only partially repaired, and it is felt for the rest of the ship's life, contributing to the decision to abandon Galactica a little over eighteen months later.

The Cylons also gain an unexpected prisoner: after being poisoned, Ellen Tigh downloads into a new body on a nearby Resurrection Ship, and regains her memory of being one of the Final Five.