This article discusses the CIC of battlestar Galactica of the Re-imagined Series. The CIC of the battlestar Pegasus contained similar stations. 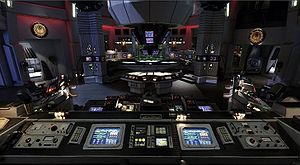 Colonial battlestars are centrally operated from the Combat Information Center, or CIC, which is the battlestar's nerve center. It performs the functions of both a bridge and a CIC in naval parlance, as the vessels are also steered from the CIC. In internal communications, it is called "Combat," so Crewman Jones contacting the room would say "Combat, Jones" and an officer calling Jones from there would say "Jones, Combat." From outside the ship, it is assumed that all communications are routed through the CIC, so there is no need to identify the station, only the speaker ("Galactica, Jones..."). 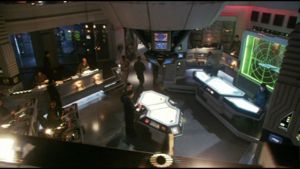 Galactica's CIC is a faintly circular room located deep in the interior of the "alligator head" of the battlestar, where the main hull meets the midship section. From the CIC, the battlestar's tactical and navigational operations are monitored and directed. The CIC is a large, two-level complex with three bulkhead exits, which are closed during action stations alerts. 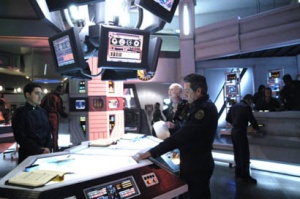 The Command and Control Station. 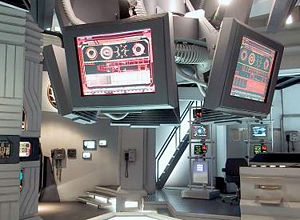 Close-up of the DRADIS Console.

The Command and Control station is the primary station within the CIC used by the commanding and executive officers aboard a Colonial battlestar. The center comprises a large communications and a roughly hexagonal "information management" table, with a retractable information display tower bearing a number of LCD screens suspended above it. There are no chairs; the command staff are always standing.

Here, the battlestar's commanding officer and executive officer are on station, observing and plotting battle tactics, viewing transparent charts, and giving commands to others in the CIC. Above the Command and Control Station is a cluster of monitors known as the DRADIS Console. The DRADIS Console descends from a cylindrical ceiling recess when required. From the Command and Control Station, the commander has a 360-degree view of the CIC. The DRADIS console contains DRADIS displays but also includes other navigation and tactical information available to the commander at a glance. The displays are capable of showing a wide range on information including:

A Cylon transponder was once mounted on the base of the DRADIS Console (TRS: "Miniseries"), supposedly planted there by Aaron Doral. 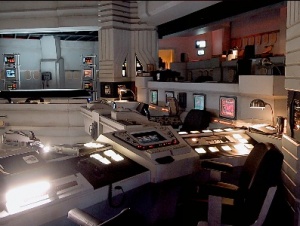 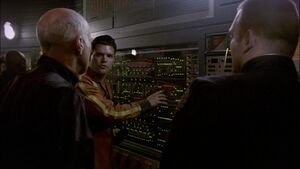 Galen Tyrol at the DC Panel after a nuclear strike on the port flight pod (TRS: "Miniseries").

Situated in the far port side of the CIC is the Damage Control Station. This station, usually unmanned, contains the Damage Control computers, which connect to many sensors throughout the exterior and interior of the ship. A large display against the wall of the station shows damage through a series of lights that represent the frames, or compartments of the battlestar that form the many segments of the ship. 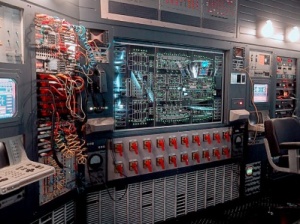 A commander can order a Damage Control Officer (DCO) to perform many actions to repair or mitigate the effects of an enemy attack through the controls here, including the venting of compartments, coordination of damage control teams, and the like. Alternative damage control stations outside of the CIC, such as the Aft Damage Control room contain similar controls to assist or coordinate in the event that the CIC's damage control is knocked offline or the CIC staff are incapacitated. 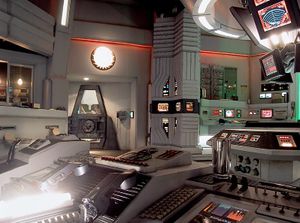 Battlestars move through space much as a submarine navigates in an ocean. There are no viewscreens and no windows to see into space for helm control. While external cameras may be available, they are seldom used in the navigation of a battlestar. Ship navigation is managed by spatial coordinates based on DRADIS and other sensor information. The helm crewmembers pilot the battlestar through a series of controls and based on commands from the executive officer or commanding officer. 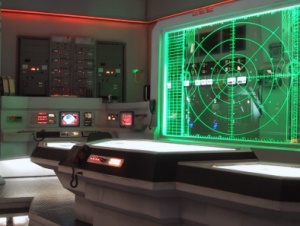 The tactical station with tactical plot and table. 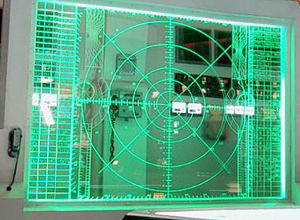 Close-up of the tactical plot.

The Officer of the Watch/Tactical Officer is arguably the busiest officer in Galactica's CIC. Tasked with the monitoring of DRADIS and coordinating various command and control functionality, including computer control, the Tactical Officer must relay changes in status and keep the commander updated continuously during the fluid events of battle. The Tactical Officer is typically the first to know that an attack is imminent and will address the entire battlestar via the Public Address (PA) system to go to battle stations through Condition One or Two alerts.

While the helm crewmembers pilot the ship, it is the Tactical Officer that plots FTL jumps, the apparently instantaneous leap from one location in space to another location millions of kilometers away. The Tactical Officer of Galactica not only has to provide jump coordinates to the battlestar's helm staion, but is also responsible for relaying both scheduled sets and sets of emergency jump coordinates to over 70 other FTL-capable civilian ships that make up the Fleet to ensure that all ships always stay close to Galactica's protective sphere. 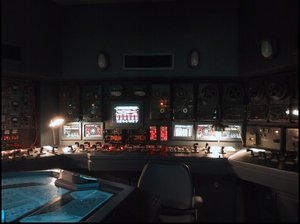 The Weapons Control Room, left of the tactical station. 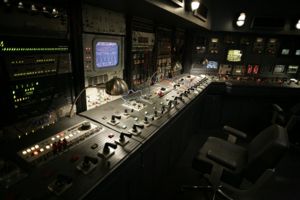 In the event that the Weapons Control Room (or the entire CIC) is knocked offline or its crew incapacitated, control of the ship's batteries can be managed at Auxiliary Fire Control. 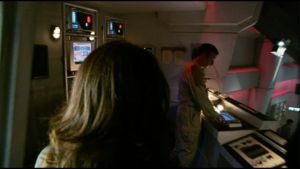 Laura Roslin walking along the stations in the Core (TRS: "Tigh Me Up, Tigh Me Down"). 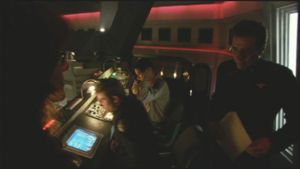 Roslin and Adama talking (Tigh Me Up, Tigh Me Down).

The second deck of the CIC, known only as "The Core", offers a bird's-eye view of the busy command deck below. This narrow passageway, lined with a limited set of computers and consoles, extends in a semi-circle from just above the port hatch around the rear of the CIC, over Damage Control, the Communications Center and Helm Control, to just above the starboard hatch. There is also a small room with computers behind the consoles. Two sets of stairs lead up to the Core; one is next to the starboard hatch, and the other is just behind the Communications Center. They can be easily spotted by the blue lights behind them.

The Core often proves to be a conveniently private area of the CIC for William Adama to meet with his associates to discuss delicate affairs while on duty. In "Tigh Me Up, Tigh Me Down" he meets here with Laura Roslin to discuss the creation of Gaius Baltar's Cylon detector, and again in "Kobol's Last Gleaming, Part II" with Saul Tigh to discuss Kara Thrace's desertion to retrieve the Arrow of Apollo.

The FTL station is in the area behind the Tactical Station. It is not routinely manned, but can be manned by up to two crewmembers. All functions of the FTL drive and computer can be controlled from this station. While the engineering portions of the FTL drive are usually controlled and monitored by the engineering staff, this station is sometimes staffed when more complex jumps must be made. This station is where the Tactical Officer plots and executes the jump. Sometimes the Tactical Officer inputs the jump coordinates himself, while at other times the station is manned by two seated crewmembers. However, the jump is always executed by the Tactical Officer himself. The FTL drive is engaged by inserting a blue "key" into a receptacle at the center of the console and turning it. This console folds down into a table when it is not being used.

Pegasus's CIC is far smaller than Galactica's, reflecting the advanced battlestar's increased automation and reliance on computer networks. According to Admiral Cain, the ship is twice as large as Galactica, but requires only half the crew (Pegasus), as evidenced by the reduced size and staffing of its CIC.

In contrast to that of Galactica, Pegasus's bridge is not located inside the alligator head, but in the forward area of the following, narrower section, as can be seen when Gina Inviere shows Kendra Shaw the way to the CIC in Razor.

The CIC has overall far fewer stations than Galactica's and occupies only one level, but the general layout is similar. The command table withits overhead computer display screens is located in the center, around which the main stations such as communications, helm and tactical are grouped, allowing the commanding officer to quickly address all officers.

There are two larger consoles with seats and no fewer than five free-standing stations; additionally, there are two standing orange-backlit transparent tactical plotting boards on opposing ends of the CIC.

While Galactica's CIC doors are solid bulkheads, Pegasus's CIC lies adjacent to a large hallway and can be accessed through a series of glass doors that pivot ninety degrees. A door is also located along the opposite wall to the extreme left.

Valkyrie's CIC is the same size as those of the Mercury class with the same general aesthetic and console configurations, although there are minor positional changes. Noteworthy differences include bulkhead coloring and the lack of the glass doors. Unlike other battlestars, there is only one main entrance to CIC that is located in the center of the wall parallel to the command table, behind where Commander Adama stands (TRS: "Hero").