Elosha is a Colonial priest present at the decommissioning ceremonies for Galactica, and later presides over services within the Fleet.

At the time of the Cylon attack, Elosha is aboard Colonial Heavy 798, returning to Caprica with others attendees of Galactica's decommissioning. When word comes that President of the Twelve Colonies Richard Adar and the rest of his cabinet have been wiped out, Elosha administers the oath of office of President to Secretary of Education Laura Roslin.

Following the Fleet's escape from the Cylons at Ragnar Anchorage, Elosha presides over the funeral service aboard Galactica for the ship's dead (TRS: "Miniseries"). With the crew suffering from shock and low morale, Commander William Adama enlists Elosha's knowledge of the Sacred Scrolls and the legend of Earth to give his people cause for hope. Elosha later presides over the Service for the Dead for the seven Galactica pilots lost in a freak accident during a celebration in the port hangar deck (TRS: "Act of Contrition").

While keeping it from others, Elosha has a crisis of faith. Though she is well-versed in the Sacred Scrolls and the history of the Thirteen Tribes of Kobol, she does not entirely believe in the truth of either (TRS: "Kobol's Last Gleaming, Part I"). Her faith is renewed when she is called to Colonial One to speak with President Roslin and learns that Roslin is having visions, one which mirrors the writings of Pythia, an ancient oracle (TRS: "The Hand of God"). Inspired by their mutual spiritual awakening, Elosha becomes Roslin's confidante and spiritual advisor and helps Roslin discern the meanings of her visions (TRS: "Kobol's Last Gleaming, Part I").

Elosha becomes the fourth person to know of Roslin's terminal cancer (TRS: "Kobol's Last Gleaming, Part I"). This confirms in Elosha's eyes Roslin's role of "the dying leader" in prophecy. 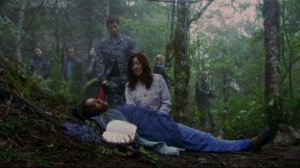 Roslin, et al. mourn the loss of Elosha on Kobol.

After Roslin's escape from incarceration on Galactica following her arrest in a military coup, Elosha accompanies her on a Raptor piloted by Lee Adama to the Astral Queen. She is visibly uncomfortable when Roslin decides to play "the religious card" to persuade 24 ships of the Fleet to follow her to Kobol (TRS: "The Farm").

While plans are drawn above Kobol to explore the planet, Elosha mentions the Scrolls say Zeus warns any return to Kobol would exact a price in blood. Once on Kobol, Elosha triggers an antipersonnel landmine left by Cylon Centurions while examining an ancient gravestone marker on the path towards the Gates of Hera and the Tomb of Athena, and is killed instantly. Roslin takes Elosha's copy of the Sacred Scrolls and sadly continues her journey without her (TRS: "Home, Part I").

During the Cylon rebel baseship's pursuit of the Resurrection Hub, Roslin experiences visions featuring Elosha at each FTL jump. In these visions, Elosha guides her through an empty Galactica and shows Roslin her death from cancer. Elosha tries to teach her to love, and convinces her to save Gaius Baltar, who is seriously wounded during the battle. Elosha also helps Roslin realize Galactica is her home now, and acknowledge her feelings toward William Adama (TRS: "The Hub").