When President Laura Roslin makes it public knowledge that Cylons are now capable of mimicking human form, paranoia spreads throughout the Colonial Fleet. Cally Tyrol née Henderson and Socinus argue with Lyman that everyone shouldn't become suspicious and stop trusting one another or the Cylons get what they want. Lyman tells his shipmates that the time for that kind of thinking is in the past and it's "every man for himself now" (TRS: "Litmus").

When Cylon Centurions board Galactica (TRS: "Valley of Darkness"), Captain Lee Adama and a team of Marines find Lyman hiding unharmed in a small arms locker filled with crewmen the Cylons killed. Adama recurits him to help repel the Cylons even though he has no idea what he's doing. Lyman takes part in the battle that follows near Aft Damage Control and survives.

Lyman also scoffs Tyrol's attempt at constructing the Blackbird, though he later reconsiders his decision and aids the deck crew and Tyrol in finishing the prototype, signing his nickname on the hull (TRS: "Flight of the Phoenix").

As with most of the Fleet, Lyman settles on New Caprica. After the Cylons occupy the planet, Lyman becomes a member of the resistance. He appears to be very religious, and objects to hiding weapons in the temple. Lyman is picked up by the Cylon authorities and asked about the events of the temple by a copy of Number Five. He later joins the New Caprica Police (TRS: "Battlestar Galactica: The Resistance").

Lyman survives the suicide bombing carried out by Tucker "Duck" Clellan at the NCP graduation ceremony. Like all NCP personnel, he wears a mask to conceal his identity, and not even Tyrol is aware of Lyman's new position. When the Cylons begin to crack down on the insurgency by rounding up and arresting random people, he participates, but soon realizes that he is in over his head. When the Cylons order the execution of 200 detainees, including Cally, he helps her escape after failing to get Boomer (who lacks the authority) to help her (TRS: "Precipice"). The Centurion firing-squad is then attacked by Tyrol and his fellow insurgents, who rescue the detainees. Lyman and the Cavil who escorted the group are the only known survivors of the NCP group (TRS: "Exodus, Part I").

Lyman escapes and is seen again as New Caprica City is being evacuated during the Battle of New Caprica. Tom Zarek gives him a sidearm and tells him to guard Laura Roslin as she makes her way back to Colonial One. Lyman is on board the presidential liner when it takes off to rendezvous with the Fleet (TRS: "Exodus, Part II"). 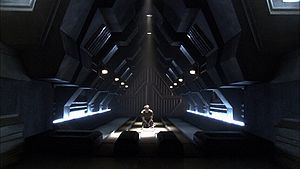 On the third night following the escape from New Caprica, Lyman is brought before the Circle, a secret tribunal created by an executive order of President Zarek. The Circle consists of six members who formerly served in the leadership of the New Caprica Resistance. The Circle convicts Lyman for having participated in killings during a police raid, in which 23 people, including one circle member's son died. Lyman pleads for his life, imploring Chief Tyrol to have mercy on him because he saved Cally's life, but eventually Tyrol gives way to the other members after Lyman admits to the crimes he is accused of, saying he got in over his head. Lyman is jettisoned from Galactica via one of the launch tubes and dies from vacuum exposure. Tyrol is visibly upset by this and later asks Cally about her escape and while she does confirm one of the NCP let her go, she is unable to recognize him as Lyman.

Later, Lee Adama informs his father that Lyman is among the people who turn up missing, as Lyman failed to report for duty the following morning and could not be located on Galactica (TRS: "Collaborators").