Julia Brynn is among the survivors of the Fall of the Twelve Colonies, later settling down on New Caprica with most of the civilian population.

Shortly after the beginning of the Cylon occupation of New Caprica, her daughter Kacey Brynn is taken by Leoben Conoy and used convincingly to psychologically torment Kara Thrace by passing the child off as Thrace's own daughter, allegedly the result of experiments with the pilot's removed ovary (TRS: "Occupation", "Precipice"). 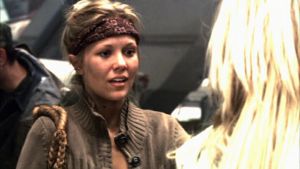 With the Second Exodus, Julia is shocked to discover Kacey alive and well, when Thrace returns to Galactica with Kacey in her arms. By chance, Julia is among many civilians brought aboard Galactica and notices Kacey in Thrace's arms. The two are reunited after four months apart. She thanks Thrace and carries on with the other surviving civilians, making their way to their temporary homes on the hangar deck (TRS: "Exodus, Part II").

Some weeks later, Julia surprises a very angry and confused Thrace, letting her know that Kacey has been asking about her. Thrace rebuffs them initially, but after being condemned for her increasingly destructive attitude by Admiral William Adama, Thrace visits Julia and Kacey on the hangar deck (TRS: "Torn").