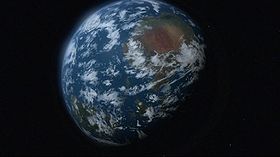 Kobol is the ancestral homeworld of the people of the Twelve Colonies, and one of two known planets where humans naturally evolved. Though it is a lush, life-supporting planet, Kobol has been uninhabited since the exodus of the Thirteen Tribes. On the surface, only ruins remain as evidence of the once-great civilization that previously existed.

Kobol is a verdant world of seas and continents, the latter having large areas of woodland, grassland, and forests. An unexplained event or environmental catastrophe caused humanity to leave Kobol and settle on the planets that form the Twelve Colonies of Kobol. However, at the time of Galactica's discovery of Kobol, the planet appears to have recovered from such an event.

The seat of power of Kobol resided in the City of the Gods in the northern hemisphere, itself dominated by the Forum, Temple and Opera House (TRS: "Kobol's Last Gleaming, Part I"), structures which were duplicated on Caprica in the city of Delphi. It is said that humans lived there in harmony with the Lords of Kobol, and that Atlas supported Kobol on his shoulders. The Messengers were witness to Kobol's civilization, and observed the same patterns there as they later would on the worlds settled by the descendants of Kobol's peoples -- "commercialism, decadence, technology run amok."

The Lords of Kobol also appear to have abandoned Kobol, but when is not known. Also unclear is whether they departed Kobol with the Tribes, although the Sacred Scrolls say that Athena killed herself in sorrow at the Great Exodus, suggesting that some Lords or humans remained to record the death before entombing Athena and leaving themselves. The Sacred Scrolls also say that Zeus warned the leaders of the tribes that any return to Kobol would carry with it a cost in blood. 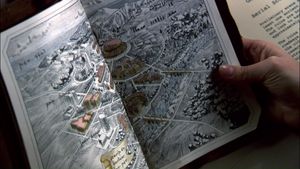 An illustration from the Sacred Scrolls of the City of the Gods (TRS: "Kobol's Last Gleaming, Part I")

During the time humans lived on Kobol, many texts were written, some of which have survived through time, and are regarded by some as religious artifacts, and by others as the documenting of myths and legends. These texts have been collected into a tome known as the Sacred Scrolls. These are the main source of information about Kobol for the people of the Twelve Colonies, as few hard facts remain.

Chief among these writings include the Book of Pythia who, some 1,600 years prior to the Great Exodus, foretold another exodus featuring a "caravan of the heavens" led by someone dying of a "wasting disease" (TRS: "The Hand of God"). This exodus would lead humanity to a new home, although the leader would die before he/she could enter the new home.

Some of the writings of Pythia have apparently come true: President Laura Roslin, the civil leader of the Colonial fleet is dying of cancer at the presumed fulfillment of the prophecy (TRS: "Home, Part II"). Further, Roslin has several visions, including one of 12 snakes (TRS: "The Hand of God"), a vision specifically foretold by Pythia.

The spectral image of Number Six that appears to Gaius Baltar tells him that human sacrifice was practiced on Kobol, and that the souls of all who die there are forever lost because God has turned his back on it ("Valley of Darkness", "Fragged"). She claims that the Colonial scriptures are erroneous in their description of life on Kobol, hiding darker truths.

Its location is unknown until it is found by the Fleet, Colonial star charts place it in Sector 728 of the galaxy (TRS: "Kobol's Last Gleaming, Part I"), when Galactica dispatches Raptors to locate planets which may provide materials needed to re-supply the Fleet, and one of them finds the planet by chance. Upon its discovery, Commander Adama suggests considering permanent settlement on the planet. However, Cylon forces are already present in the system.

Following the discovery (as predicted by the humanoid Cylon Leoben Conoy) as well as her own prescient visions, Roslin becomes convinced that Kobol will lead the fleet to Earth, providing the Tomb of Athena can be found. To do this, priest Elosha notes that the Arrow of Apollo must be retrieved from the Delphi Museum of the Colonies on Caprica.

Against Commander Adama's military orders, Roslin begins a quest to retrieve the Arrow, leading to her arrest (TRS: "Kobol's Last Gleaming, Part II"). She later escapes, and leads a third of the Fleet to Kobol (with the retrieved Arrow) to begin the search for the Tomb (TRS: "Home, Part I")

A scouting team sent to Kobol is ambushed by Cylon forces. The survivors manage to escape further Cylon assault after a SAR mission (TRS: "Fragged"). Both expeditions to Kobol suffer casualties, in keeping with Zeus's warning.

Commander Adama later joins Roslin's expedition, and soon finds the Tomb of Athena. They are the first people to glimpse the inside of the Tomb in centuries, and use the Arrow to activate a holographic map display, which indicates the general direction of Earth (TRS: "Home, Part II"). Afterwards, the Colonials abandon Kobol again, never to return.