This article discusses a specific Cylon copy found on the battlestar Pegasus.
For information on other copies of this model, see Number Six.

Gina Inviere[1] is the alias ("inviere" is Old Gemenese for "resurrection") of a Number Six copy who poses as a systems analyst aboard the battlestar Pegasus.

Two years prior to the attack on the Colonies, she served as a handler of sorts for Sharon Valerii. Inviere walks her through her upcoming integration into Colonial society and reassures her that it will be just like resurrecting, and that when she awakens she'll be a whole other person (TRS: "The Plan").

She resurfaces several months before the attack on the Twelve Colonies, in the employment of Integral Systems Engineering. She presents a proposal for the retrofit of Pegasus to the Ministry of Defense and worked out the details of the CNP upgrade with Admiral Cain directly. During that time, the two grew close and eventually started having a relationship. They try to be discreet in front of the crew, but don't make it a secret either.

Working alongside Kendra Shaw on Pegasus, Inviere manages to gain the officer's trust and use of her personal access codes.

Shortly after the attack on the Colonies, Inviere is instrumental in finding a Cylon communications relay - which turns out to be a staging grounds with squadrons of Raiders far in excess of what the Colonials expected. During the ensuing battle, she helps a boarding party of Centurions gain access to the ship, which leads to many casualties.

When Shaw encounters another Six, she realizes that Inviere is a Cylon and unmasks her in CIC. Inviere kills two Marines but hesitates to kill Cain, indicating that her feelings for Cain are in fact genuine, and is knocked unconscious by Shaw just as she is about to pull the trigger. Inviere is then taken into custody.

With the destruction of mankind's homeworlds and Inviere's personal betrayal and manipulation fresh in mind, Admiral Cain quickly suppresses her feelings for Inviere, and no longer treats her as a human being, but a thing. She orders Lieutenant Thorne to interrogate Inviere and to employ "degradation, fear, [and] shame" while being as creative as he needs to be. Thorne employs whippings in his torture sessions and, along with other male crew, gang rapes her, reducing Inviere to a nearly catatonic state, but ultimately fails to gain any intelligence (TRS: "Razor").

When Pegasus encounters Galactica and her Fleet, Inviere is examined by Dr. Gaius Baltar. He is heartbroken by her state, and resolves to help her in any way he can. He convinces Admiral Helena Cain to permit her to be fed, and recounts to Inviere the story of his love for her copy on Caprica, before the Cylon attack (TRS: "Pegasus").

Inviere, speaking for the first time in many months, tells Baltar that she was not a sleeper agent; she was fully aware of her mission and expected to be killed and resurrect back among the Cylons after carrying it out, but instead was subjected to horrific torture by the Pegasus crew. She begs Baltar to kill her and put an ultimate end to her suffering. Baltar reminds her that she would just be resurrected in another Number Six body somewhere else. No longer wishing to live in any form, Inviere betrays her fellow Cylons in order to fulfill her personal death wish. She reveals to Baltar that she won't download if the unknown Cylon ship that Pegasus is tracking is destroyed. 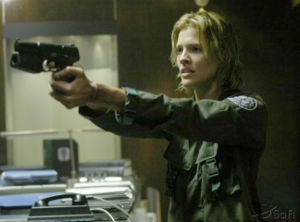 When she senses that the Resurrection Ship is destroyed, Inviere begs Baltar to kill her. She is incapable of killing herself, because within the Cylon religion, suicide is a mortal sin. However, Baltar convinces Inviere that she should go on living and get "justice" for what happened to her. With Baltar's help, Inviere escapes from her cell, makes her way to Cain's quarters and shoots Cain with a pistol, killing her. She then somehow manages to escape Pegasus (TRS: "Resurrection Ship, Part II").[2]

As Laura Roslin finds herself on her death bed, Demand Peace — a movement seeking peace with the Cylons — summons Baltar to Cloud Nine. Inviere has assumed a leading role within the peace movement, her followers unaware of her Cylon nature. She disguises herself by means of glasses and a different hairstyle. Inviere attempts to convince Baltar that, upon assuming the presidency, he should go up against Adama -- and thus solidify the distrust of the military within the Fleet.

Because of the extreme sexual abuse she suffers on Pegasus, and atypical of her model, Inviere now abhors intimate contact, as observed when she bites Baltar as he instinctively tries to kiss her. After Roslin recovers from her cancer -- thanks to Baltar's perceived unappreciated efforts -- Baltar gives Inviere the nuclear warhead earmarked for Baltar's research as part of his Cylon detector (TRS: "Epiphanies"). 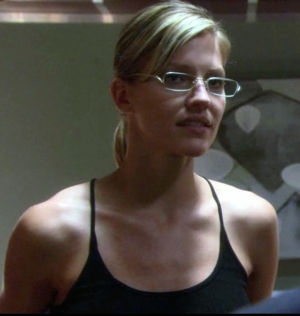 Following Baltar's election as president of the Twelve Colonies, he visits Inviere once more aboard Cloud Nine, attempting to explain to her that because of his new duties he'd be unable to see as much of her as they'd like. After he remarks that he'd make what time he could on New Caprica, she tells him that she wouldn't be leaving the ship to join the new colony. Angry, Baltar attempts to leave the room, but Inviere simply says "stay," while proceeding to undress, choking back her physical aversion in a desperate attempt to make him stay with her. They share an intimate interlude.

While Baltar is being sworn in as president, Inviere sits naked on the floor of her room in front of the nuclear warhead. The timer running, The Cylon once known as Gina Inviere cries softly as the device detonates, blowing up herself, Cloud Nine and several ships in the vicinity. One year later, the radiation signature from this explosion leads the Cylons to New Caprica, beginning an occupation of the planet (TRS: "Lay Down Your Burdens, Part II").

Despite there apparently being a second Resurrection Ship in range of the Fleet not long before her death (Galactica Cavil tells his Caprica counterpart there's a ship in range), her death is apparently final. Presumably the ship was out of range by that time as the Cylons stopped their pursuit of the Fleet and didn't know where New Caprica was.