This article involves the survivor count of the refugees in the Re-imagined Series. For a count of losses and gains in the Fleet incurred during the Original Series, see: Fleet population.

The number of surviving Colonial citizens and military in the fleet was provided at intervals throughout the first season on a whiteboard on Colonial One, and in one instance spoken aloud in dialogue. In the second season, this number appears in the opening credits of every episode (sometimes jokingly referred to as the "Countdown to Extinction"), and displays limited omniscience, updating itself to reflect the deaths on Kobol early in that season. This page collects the figures available thus far, cross-referenced with date information from Timeline (RDM). 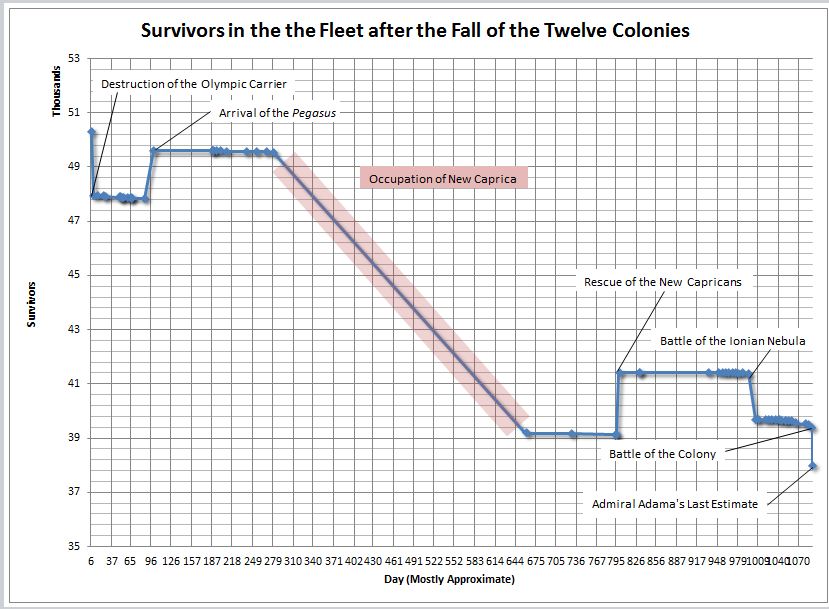 All dates up until 51 are exact, 51-950 use estimates below, all tallies past 950 use an average of 5 days between counts (it averages out)

For a confirmation of these estimates with more accurate numbers see the "Crossroads, Part I" section

Note: While this number of military personnel fits with the estimate about their strength during the settlement of New Caprica, it still does not fit with the depiction of overcrowding on Galactica after the escape from the planet and the destruction of Pegasus, since the battlestar was crewed with approximately 2,600 people to begin with. The number of civilians should therefore be lower.