With Gaius Baltar's trial merely two weeks away, Lee Adama is tasked with protecting Romo Lampkin, Baltar's second lawyer, and finds himself going up against his own father, who himself is appointed as one of the five judges in Baltar's trial. 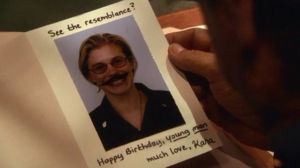 Adama happens upon an old, self-made birthday card from Kara Thrace, while reviewing her jacket.

"The point is," he said, "that people like you and me, Slartibartfast, and Arthur -- particularly and especially Arthur -- are just dilettantes, eccentrics, layabouts if you like...We're not obsessed with anything, you see... And that's the deciding factor. We can't win against obsession. They care, we don't. They win."


"But unless we determine to take action," said the old man querulously, as if struggling against something deeply insouciant in his nature, "then we shall all be destroyed, we shall all die. Surely we care about that?"


"Not enough to want to get killed over it," said Ford.

Mark Sheppard: Ron had said that he gave Michael Angeli carte blanche to make this character as odd and as wide as he wanted to make it. Michael Angeli is a very, very, very clever writer. It’s wonderful dialog, it’s a wonderfully convoluted, complicated character. You know the glasses idea was his idea, he wears dark glasses a lot, Michael Angeli, and the glasses were very important to him. And he put the cat in and all these strange elements and the kleptomania. and there are all these other questions, is he a Cylon? a manipulator? is he this, is he that. All of these things are kind of irrelevant. I played him as the last sane man in the universe. If you think of the episode "The Son Also Rises", my first episode, it’s the episode after "Maelstrom". Maelstrom is a disaster, an absolute disaster! The end of "Maelstrom" leaves you with this huge hole, this gap and I walk in to a group of people in mourning. They are in mourning for Starbuck. I think I’m the only person paying attention. I think none of them are paying attention because of the events of New Caprica and everything that has happened since New Caprica. I mean basically they just want to tear Baltar to pieces, they kind of admit that they will move the trial forward because people need it, they need the trial, they need something.[3]

Mark Sheppard: There is this lovely scene that they cut out. At the end of the scene when Lee says if anything moves don’t touch it, if anything is in the wrong place, it’s when he is worried about me finding a bomb. And my line is if they want to kill me they’ll find a way, now how do I get to see the Cylon woman. And I looked down and Jerry the cat is sitting there and what is funny is I looked at him and there is a line [where I say], "Please go boom." And what happened is the cat looked up at me when I spoke to him, then as I looked away, he looked away. It was very funny. (laughs) Cats do what they wanna do.[3]

Sheppard: It’s very, very weird. It was a very, very, very weird day. But it was kind of brilliant. I think he took great delight, and as I take great delight, in the fact that most of the time I tend to play what are termed "villains" – I don’t think of people as villains, but people with massively different agendas than the heroes usually in our pictures, especially in sci-fi. And this, I think, is very, very different. I think Romo is very, very different. I mean…somebody asked me, "Do you think he’s a Cylon?" First thing Eddie [Edward James Olmos] said was, "The first thing I’d be thinking was: he’s a cylon." I’m like, but does it really matter? Does it matter whether he’s a cylon? It actually doesn’t. I mean, his principles are extraordinary. His logic is I think extraordinary.

It’s just because he's very deliberate in the way that he executes what he does. As a character – the character is written very deliberately, in a manner that he has a very different set of moral values than the people around him. Which I think is an absolutely amazing thing to play. Plus being a kleptomaniac, you know – if you have a bizarre trait it doesn't hurt along the way. Michael Angeli's [writer] kind of brilliant when it comes to that kind of writing.[4]

Information from the podcast:

Saul Tigh: Your Honor. (Adama looks at Tigh, confused) You haven't heard? Where have you been? They've just announced it. You won the lottery. You own exactly 1/5th of Baltar's skinny ass.

Lampkin: I was born for this. That, and the fact I have a pulse.

William Adama: What the hell were you doing out there? I gave you an order. To do a job.
Lee Adama: Excuse me, I was doing my job.
Bill: Yeah, being led around by the nose! This bastard yanks your chain and you jump.
Lee: He wanted files from Colonial One–
Bill: It was the middle of the night.
Lee: Well, you assigned me to security.
Bill: Yeah. And there was a bomb on that ship. And you missed it. Security? I gave you explicit orders.
Lee: Athena was piloting.
Bill: You coulda died. Plain and simple. You're a soldier. Live like one. Start acting like one!
Lee: She's been gone two weeks. I didn't realize the clock was running.
Bill: (softly) Stop.
Lee: No, I'm sorry. Maybe because we're just built differently.
Bill: You stop. Don't you dare quantify my loss.
Lee: You have no idea. You have no frakking idea.
Bill: What, you think yours is deeper?
Lee: Well–
Bill: Yours is greater? (Lee doesn't respond) In two weeks, there's going to be a trial. And I'm going to do what I was chosen to do, and so are you! You build a frakking nest around this man and you protect his ass!

Lampkin: I loved a woman. Beautiful, beautiful woman. But so serious. This frowning face, trapped in the middle of a daisy. She had a way of walking, processional. As if she were o­n her way to her own execution. We had ten years. Then it fell apart under its own weight.
Caprica: Is that what you wanted?
Lampkin: I thought if I could get over her, I could get over anything. I could endure. Conquer. Be a man, stand up to any and all kind of punishment. I clung to an empty, spinning bed for months. And that... that is when I finally realized how much I loved her. If I needed all that strength, ...what, was the point? I needed to be with her.

Tyrol: I believe that the Cylons want us to destroy ourselves and this is how they're doing it. By planting bombs, making us suspicious of each other. You know what's funny? By the time the Cylons catch up with us, they won't even have to attack. They'll just clean up the mess we made. I think they're here.
Sharon Agathon: I think you're wrong.

Lampkin: Everybody has demons. Them, Baltar, you, me. Even the machines. The law is just a way of exorcising them. That's what your father's father told me. You want to know why I hated him? Because he was right.
Apollo: So you hated him because he was right, and I hated the law because it was wrong. Because of what— of what it put him through. I mean, he defended the worst of the worst. I remember reading about him. The outrage, helping murderers go free. What I don't understand is why he put himself through all that abuse—
Lampkin: You think he gave a flying frak? Joe Adama cared about o­ne thing: understanding why people do what they do. Why we cheat our friends, why we reward our enemies. Why we go to war, sacrificing our lives for lost causes. Why we build machines in the hope of correcting our flaws and our shortcomings. Why we forgive, defying logic and the laws of nature with o­ne stupid little act of compassion. We're flawed, all of us. I wanted to know why, so I did what he did: I spent my life with the fallen, the corrupt, the damaged. Look at you: you were so ready to get o­n that Raptor with me, be the bad boy, the prodigal son!
Apollo: No, I was just doing my job, protecting you!
Lampkin: What are you doing in my business? Suddenly I'm handcuffed to a serial contrarian?!
Apollo: No, I am not— oh, OK.
Lampkin: My bed is made. I suggest you toil o­n your own. Now, if this cross-examination is over, I'd like to take a crap.

Lampkin: My demons. I borrow things. My parents disappeared when I was nine years old. They were kidnapped. Murdered for the money they had o­n them, which wasn't enough. I went to live with an uncle, stole from him until I could run away.
Adama: So what did you take from me?
Lampkin: I was thinking the photograph that you carry. The girl. The pilot. The one you carry [in your pocket]. But you've had enough stolen from you already.

Kelly: I would have never let Athena airborne with you on the Raptor. I would have stopped it. You know that.
Adama: Yeah, I know that.
Kelly: You'd better lock me up. And I don't want any trial. I won't stop. I will keep trying. I'll keep at it, I will. I did my job, sir. And I have done my job for two years. Every day I've sent people out to fight. I cleared them all to die. So many people. I just got tired of living with that. You ask that man, if you had to choose between giving up his life for a Cylon or human, what do you think he'd say? I had to do something.

Lampkin: There's no greater ally, no force more powerful, no enemy more resolved than a son who chooses to step from his father's shadow. Romo Lampkin.