Count Iblis is the Colonial version of the Prince of Darkness, who almost tricks a majority of the Fleet's citizens to follow "him".

He was previously a Being of Light who fell from grace after using his powers for evil purposes. He is known as Lucifer, Prince of Darkness, Mephistopheles, "The Devil", and Diabolis.

Discovery by the Fleet

Captain Apollo and Lieutenants Sheba and Starbuck come across this manifestation of evil itself while they are about to investigate the wreckage of what once was a fairly large vessel. Iblis manages to trick them into believing he is a confused survivor of the crash, also fooling Apollo's instruments into believing that the ship had a high radiation level. Sheba appears to be quite taken by his charms.

They take him back to the Fleet, initially believing that he is benevolent. Sheba, much to the ire of Commander Adama, shows him around the sensitive areas of the ship, revealing that their technology is being interfered with by Iblis, though this is unknown at the time. Two medtechs attempt to gather readings from the newcomer, however nothing is recorded from their scanners; Cassiopeia also attempts to do a scan of him, however again it is in vain. 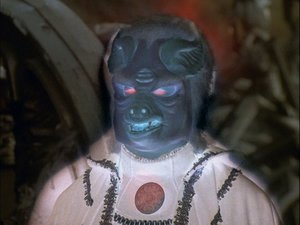 Iblis begins to influence people to turn their backs on Adama and the mission, promising anyone who would pledge fealty to him that they would be protected. He also has the ability to read minds, influence those that follow the ways of evil or pledge fealty to him, take control of those who allow him to do so, and even kill those within his dominion. He must, however, convince people to follow him and not force them to do so. In order to convince people to join him in his pursuits of evil, he performs feats such as providing food aplenty from the Agro Ship Nine and bringing Baltar, humanity's traitor, to them. This causes celebration throughout the Fleet, and for people to suddenly decry Adama. He also takes possession of Boomer's body in a Triad game on the Rising Star when the Warrior comments that he would do anything to beat Apollo and Starbuck. This happens with Boomer's consent, though he does not explicitly know that he has done so at the time.

All of this further cements Iblis' position within the Fleet. Yet, ironically, when battle stations are called, and the pilots are too tired to respond, he severely chastises and threatens them.

Of course, those who oppose the ways of evil and hatred watch such a being, and spheroid-like specters appear and disappear at random. Iblis instills what people would call "the fear of God" into people who see the lights, including Sheba, who stays close to this incarnation of evil itself.

Adama, on the other hand, opposes him, joins with Tigh and a few others; essentially a minority, though still threatening to Iblis' power. For the time, the majority supports Iblis, since he seems to do more than the mortal Adama can.

Had it been discovered that Iblis was the one who helped foster the Cylons that destroyed the Colonies, he would be cast out by a majority of the Fleet. This was discovered, in part, by the captured Baltar's recognition of Iblis' voice being the same as the Imperious Leader's.

When Apollo informs Adama that he is going back to the planet to find out what is in the wreckage, Adama informs him that he would do his best to avoid being scanned by Iblis. Iblis, however, feels something is wrong and goes to Adama, who attempts to block out Iblis by thinking of other things, playing music in his head, and other methods he was taught at the Colonial Military Institute in Telekinetics. His mental abilities much more powerful than Adamas', Iblis finds out that Apollo and Starbuck are en route back to the planetoid. Sheba, presumably influenced in some manner by Iblis, follows in her Viper and attempts to stop them.

After Apollo and Starbuck discover the demon in the wreckage of the leviathan vessel on the unidentified red planet, Iblis is revealed for who he truly is. Laser discharges from Apollo prove ineffective to Iblis, although it does cause him to reveal his true appearance - into a horned-creature of purple-color with red-eyes.

When Starbuck and Apollo haphazardly manage to convince Sheba to reject Iblis, he attempts to make an example of her. Apollo steps in the way of the blast of light and is killed in the process.

This act causes the Beings of Light to deal with Iblis, as he is not permitted to kill anyone outside of those that gave him dominion.

As Apollo was not meant to die, the Beings of Light restore him from the death by "primitive measures" and send them on their way while Iblis is, despite his threats, being dealt with (War of the Gods). 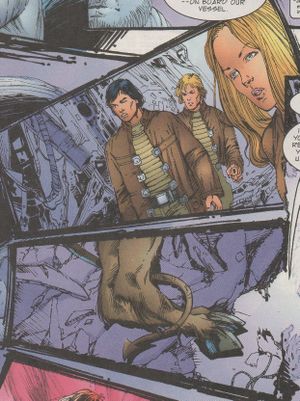 In the Book of the Word, Iblis is described as a "fallen Angel (sic), known variously as Diaboles (Diabolos|Devil) or Mephistopholes [who] repeatedly attempts to lead the humans astray, but is bested always by the intervention" of the Beings of Light. Folktales apart from the Book describe Iblis as a "comic prankster, half man and half beast".[1]

In the Re-Imagined Series