The Return of Starbuck

Doctor Zee relates a dream he had about a pilot called Starbuck to Commander Adama; thus revealing Starbuck's fate. 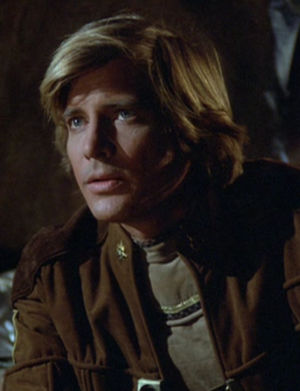 Starbuck in The Return of Starbuck 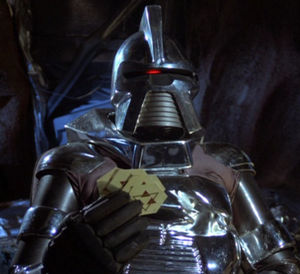 Cy in The Return of Starbuck

Starbuck: Goodbye. Thought I was going to give up and die, huh?

Centurion #1: That was an unexpected move. He is a very good Warrior.
Centurion Commander: That is a small consolation. We are going to crash.

Boomer: But sir, we can't just leave him there!
Adama: Boomer, don't you think I want to go back for him? You think I want to leave someone I love like a son, knowing we'll never see him again? Take a look out there!

Adama: We'll be lucky if we can save our Fleet!
Boomer: You mean we can never go back?
Adama: That is correct! There is no going back! Our enemy pushes us on and on and on! And until we're strong enough or can find Earth and get help, we can never stop or turn away or look back!
Boomer: Thank you, sir. I appreciate your honesty.

Scan Officer: First enemy wave has been taken back. They're running with our fighters in pursuit.
Adama: Order our fighters to break off and let them run! Fleet is to proceed ahead at flank speed!

Adama: Goodbye, Starbuck. I love you. We all love you.

Starbuck: Well, this is a grand day! Only been in charge of this planet for three days and already I've doubled the population! I do hereby declare myself president-elect, if that's all right with you.
Cy: Die, human.
Starbuck: Don't be ridiculous.

Starbuck: You'd think I'd save you and then let you shoot me? Besides, it doesn't work. See. (pulls trigger, seizing sound) Here, try it.
(Starbuck hands weapon back, Cy pulls trigger)
Starbuck: You really did!

Starbuck: So, what happened during the landing?
Cy: The situation did not compute.
Starbuck: So you didn't know what to do. What happened next? (jokingly) Someone whip out the manual.
Cy: Yes. The Manual did not help.
Starbuck: (gives Cy an odd look) What'd you do when it came time for a little personal initiative?
Cy: We were taking a vote when the ground came up and hit us.

Allan Cole: Basically, GL [Glen Larson] was tired and pissed off. [Galactica 1980] was never the show he wanted to do. And he and Dirk Benedict were always pretty tight. He talked Dirk into coming back to do one last episode. Which was basically a two-man radio play. Personally, I think it was the only decent episode in the series and showed what GL could have done if they had let him alone.[1]

Allan Cole: If the series hadn't been cancelled, there would have been a strike over it.
Chris Bunch: Larson decided that he was going to describe how Starbuck eats it. What he didn't do was pass the word along to his cohorts and say, "Oh, by the way, one episode is going to be a flashback."
So here's Kent McCord, who's desperately unhappy with the show. He's been coming down and crying the blues to us. Then all of a sudden he's told that he doesn't have to work next week because they're doing something with Dirk Benedict, the former star of the series. Well, that wasn't the most polite way to deal with it because all actors have an ego.
Cole: And he's been putting his ass on the line, making a fool of himself every week with these rotten scripts. By suddenly bringing back Dirk Benedict in without advance warning or kind words, it's sort of like trying to put the blame on Kent for how the show was going. He was pretty angry about it and in fact the two actors [McCord and co-star Barry Van Dyke] were going to refuse to shoot the next episode, which would have been "[The Day They Kidnapped] Cleopatra". They were supposed to shoot the next day but Kent and his costar were refusing to show up. As it turned out, it was an empty threat because that afternoon the network pulled the plug on the series.[2]

Q: Do you think the cast realized they were on a sinking ship?

Cole: Actors never really believe it's over until they close the theater door. They started shooting The Day They Kidnapped Cleopatra and then the word came down that the show was cancelled. ABC pulled the plug right there.

Bunch: So we had an impromptu wrap party. These actors are now on unemployment and we were trying not to break into hysterical laughter!

Q: Where did the excellent final episode The Return Of Starbuck come from?

Cole: That was actually a good piece of television because it was written like a radio play. The show had already been cancelled when the episode aired.[3]