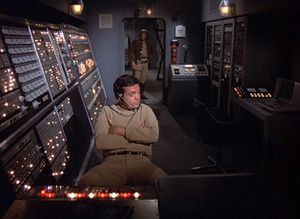 The computer room is typically occupied by Corporal Komma ("The Gun on Ice Planet Zero, Part I", "Murder on the Rising Star"), who is tasked with the maintenance and operation of the computer.

Starbuck manages to get Komma to leave, long enough to use one of the consoles in the computer room so that he can be added to the Arcta mission, in order to determine the fate of Cadet Cree (TOS: "The Gun on Ice Planet Zero, Part I").