As Colonial Warriors attempt to contact Earth scientists to aid in improving their technology, Earth authorities complicate Troy and Dillon's mission, while Doctor Zee discovers that a rogue Council member is attempting to change Earth history. 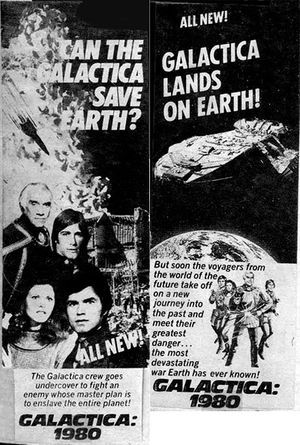 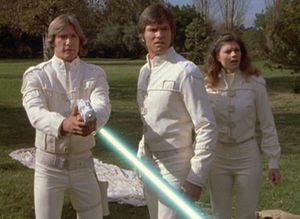 In the December 13, 1979 revision of the script for this episode, there are a few noted differences:

Xaviar: Adama, your grandson was to have reported in long ago. We've heard from all the others.
Adama: Xaviar, please be patient.
Xaviar: (interrupting) The folly of the whole plan is so desperately dangerous, I cannot agree.
Adama: Not exposing this planet Earth to our enemies is in the best interests of our Earth brothers and ourselves.
Xaviar: That I agree with! But we have other means. A tool we have sought for generations and possess, thanks to our young genius.
Adama: Well, if you are referring to the time warp synthesizer, I cannot agree. The whole concept of time travel is extremely dangerous. Forcing a whole civilization forward beyond the speed of light, pushing it back into the past. It's never even been tried.
Xaviar: Adama, what could be more vital to the speeding up of Earth's civilization and by going back into her past and introducing scientific tools hundreds of Earth years earlier?
Adama: We know nothing of the consequences of changing that which has already been.
Xaviar: Then we'll find out. I could lead an expedition into Earth's past. We could introduce electronics, flight, atomic energy. Let me at least present it to the council for a vote.
Adama: The council has never overruled Dr. Zee. He's never been wrong.
Xaviar: It has never been this critical. Side with me. I am a great leader. I could deliver us a planet capable of saving us now.

Jamie Hamilton: What are you guys? Martians?!
Dillon: (after consulting the wrist computron) Close.

Stockwell: Look, lady, you're making me very nervous with all this strange terminology.
Troy: What, you think you got a problem with terminology?

Hamilton: (after Stockwell brings up the V-2 rocket) Of course, the V-2. It almost changed the course of the war.
Stockwell: Almost changed? Why are you always talking in the past tense?
Troy: This is no time to be correcting grammar. Now, let's do whatever it is we're going to do.