After the school ship Delphi is attacked by the Cylons, a shuttle carrying Captain Troy and a group of children crash lands on Earth, and Commander Adama and Dr. Zee must work to rescue the stranded crewmembers, who are becoming sick due to drinking contaminated water from a chemical plant. 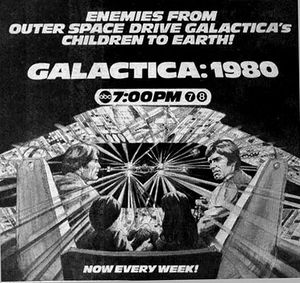 Changes from Script to Screen...

Q: Were there any amusing incidents during filming?

Bunch: The school ship episode! (The Super Scouts, part one) If you look at the shot where they burn up the school ship, the sequence is - Troy and Dillon come out of this entryway. There's a control panel to their right which explodes. They start down the steps, then there's another explosion. They do a pinwheel, they pick themselves up...

Cole: And then they look around for a minute with a puzzled look on their faces...

Bunch: Then they haul ass out of there! There was supposed to be this enormous I-beam that would come down from the rafters and almost nail them. Unfortunately, we weren't there during filming, but we saw it during one of the few times we watched dailies: the scene was over, but the camera was still rolling. Vince Edwards, the director of the episode walks onto what's left of the set and says, "Wasn't there supposed to be a beam...?" Way up in the rafters, you hear someone say, "Beam!" - and it comes crashing down and misses Vince Edwards by an inch and a half!

Also in that episode, the ship is on fire and Vince directed everyone to stroll along as if they were underwater or walking through maple syrup! We're watching this in the dailies and Larson is way in the back screaming, "Why aren't they running???"

Cole: Larson's fuming and you can't redo the scene because the set's burned to the ground![2]

Allan Cole: Basic rule of special effects. If you are going to burn something, you only get one go. And if you recall, there was a big damned fire scene. You should have heard GL [Glen Larson] scream at Vince [Edwards] for the slow pace of the direction. But he really blew his top in the big explosion scene. There were about three major bits missing, including a beam that collapses, mushing the whole bridge. I personally witnessed this. Vince cues each special in turn, cues the stunt men, cues the blast, and then the stunt men (standins for Kent [McCord], etc.) stand up, scratch their heads then trot off. Vince shouts cut. Then walks out onto the set, puzzling. "Hey," he says, "wasn't there supposed to be a beam?" Up above, a prop guy thinks he's just gotten the cue. "Beam!" he shouts. Said beam slams downward, narrowly missing Vince.

Vince also had the brainy kid [Patrick Stuart] terrified. So scared he was frozen and wouldn't move his head during the whole episode. During dailies, GL kept muttering loudly, "What's wrong with his neck? Call his teacher! Call his mother! Call anybody who can fix his neck!" Making things worse was the fact that the frightened kid's voice was changing. So everytime he said, "Adama" there would be this big falsetto crack. Very, very, funny. Too bad it wasn't intentional.[3]

Cole and Bunch on the chaotic nature of the show and its constantly changing premise:

Q: Do you know if Larson had any other flashback episodes planned?

Bunch: Larson never plans anything! He puts paper in the typewriter and starts typing! Along about page 56 an idea pops into his mind. He'll get to page 58 and type "End Part One". There wasn't enough story in the three-part pilot to fill a one hour script!

Bunch: "We've got this Air Force guy after them - no, we don't!" I still don't remember if we settled on the Air Force guy or not.[4]

Allan Cole on using kids on the show:

The kids on the show drove us all nuts. Shooting with children is probably the hardest kind of series to do. There are many, many restrictions. Plus they all have to have a teacher and if the kid is a star you have to listen to the teacher as if she were speaking from on high. And then there are the stage moms, all of whom ought to be locked up. It's a wonder any of the kids escape with a shred of sanity. If you have children, do not -- I repeat: do not -- urge them to take up a show biz career.

Do you recall the episode where all the kids from the mother ship troop into the Observatory? That was shot at night. And the only thing harder and more expensive than shooting at night (except for water, never, never do a water show) is shooting at night with children. They can only work a few hours at a time as it is. And night is golden time when it comes to wages -- for both them, the teachers, and, obviously the rest of the cast and crew. This also means you can't shoot anything early the next morning. So if you don't have enough night stuff in your script to warrant another setup the following evening, you lose a whole day. The only way around it is to shoot on Saturday night, which gives you a natural Sunday "break."

In this case, because of the craziness on the show, neither option was open. Plus the kids were either all sleepy, or hyper -- laughing hysterically or weeping; no inbetween. Or getting lost and you had to track them down again. Driving the planetarium staff out of their gourds.

I forget how many kids were in that scene, but the only way we could get it to work at all was to cast as many sets of twins as possible. Some kind of record -- for casting twins -- was probably set by that episode and the school ship episode. But "Program Practices" was all over GL for not having enough kids. So, he said, "Okay, I'll give you kids crawling out of your ears." And he did![3]

Adama: Perhaps we could confer with the leadership on Earth.
Zee: To negotiate with one faction on Earth is to arouse the mistrust and paranoia of every other. We could inadvertently trigger the final war.
Adama: So, we have tools we cannot use, medicines we cannot offer, and knowledge we cannot share.
Zee: All these things we will give to them. First, we must prepare the way.

Dillon: I'll get this back to you in time. Where do you live?
Bank Teller: Are you crazy? You think I'm going to tell you where I live? (after Dillon points the laser gun at her) 327 Harrat Street. But I'm moving just as soon as you finish robbing this bank.

Troy: You did what?
Dillon: It's called "robbing a bank". I couldn't help it, it just happened.

Sales lady: And what council are you from?
Troy: The Council of Twelve.
Sales lady: That must be from out of this area.

Troy: Aw, nuts.
Dillon: Nuts? You're hungry at a time like this?

Zee: Adama, since the time of our defeat, the Cylons have not been idle. Not only have they developed new machines, but they have evolved beyond our greatest fears.
Adama: In what way?
Zee: Consider this: In 30 Earth years, it is possible to create a totally new technology.
Adama: If they're so almighty powerful, why don't they simply destroy us?
Zee: They wish to experiment with their new machines.
Adama: Using us as living targets.