Raptor 718 is a designation of no fewer than two different Raptors.

Raptor 718 is a Pegasus raptor flown by Richard "Buster" Bayer during a Raptor training exercise ordered by Captain Kara Thrace.

During the exercise, it responds to a distress signal with Raptor 314 within the dark clouds of a binary star system. Not long after, the crews of both Raptors no longer respond and are presumed lost or disabled within the cloud.

Raptor 718 and its companion Raptor are found by Pegasus, its crew inside killed and its atmosphere vented into space. As it turns out, the Raptors were bait by the Cylons to lure Colonial forces into the cloud, as predicted by Admiral Adama. The Raptors are abandoned after three Cylon basestars ambush Pegasus, eventually forcing it to retreat (TRS: "The Captain's Hand"). 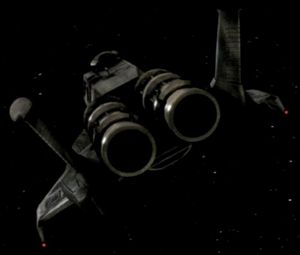 Raptor 718 is flown by Lt. J. "Shark" Finnegan and "Easy" Esrin while shuttling Galactica crew and allied rebel Cylons to Zephyr. When the Fleet jumps away due to a false alarm, the Raptor accidentally jumps beyond the red line, stranding four humans and two Number Eights aboard with a depleting oxygen supply. In order to extend said supply, "Sweet Eight" stealthily kills members between Jumps, leaving only herself and Felix Gaeta; Gaeta kills her, but not before she manages to jump the Raptor most of the way back to the Fleet.

718 and its lone survivor, Gaeta, are later recovered by SAR Raptor 1029 piloted by Margaret Edmondson with Lieutenant Louis Hoshi aboard (TRS: "The Face of the Enemy").