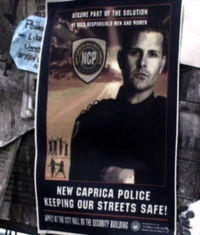 The Cylon Occupation Authority creates the New Caprica Police (NCP) in response to security issues with the captive humans who inhabit New Caprica. The group consists of humans who are either coerced into working for the Cylons, or join the police voluntarily because they believe that they can deal with the human population more effectively than Centurions, and thus prevent unnecessary suffering and deaths.

With numerous security restrictions and heightened levels of control imposed on the populace New Caprica, a band of human resistance fighters, regarded by the Cylons as unlawful combatants, begins to strike back against the occupying Cylon force. The NCP is formed in direct response to this insurgency.

NCP members are often tasked with performing "dirty work" for the Cylons; rounding up suspects believed to be part of the resistance as well as innocent civilians, illegally imprisoning, beating and executing them. Wearing dark balaclava helmets (colloquially referred to as ski masks), blue body armor, and green uniforms with white armbands, the NCP remain anonymous to the general population of New Caprica, who see them traitors collaborating with a brutal occupying force. Resistance members estimate that up to 200 humans are secretly working for the group.

The most significant damage the resistance inflicts on the NCP takes place when the group is infiltrated by Tucker Clellan. In a spiraling depression caused by the death of his wife Nora Farmer (The Resistance - Episode 4), Clellan agrees to be wired with explosives and to detonate them during a graduation ceremony for new NCP recruits. In addition to Clellan, thirty-three NCP cadets and numerous Cylons die in the explosion. James Lyman, a New Caprica Police captain and former deckhand under Chief Tyrol on Galactica, survives the attack. The intended target of the suicide bombing, Colonial President Gaius Baltar, chooses not to attend the gathering and is unharmed as well. Later, the NCP, acompanied by a Cavil, lead a group of 200 people including former President Laura Roslin and Vice President Tom Zarek to Peragmus Flats for execution by a firing squad of Centurions, but are ambushed by the Resistance who rescue the captives, destroy the Centurions and decimate the NCP group. The only known survivors of the NCP execution group is Lyman and the Cavil who survives by eventually downloading to another body. ("Occupation" , "Precipice", "Exodus, Part 1").

After the human population escapes New Caprica and reunites with the Fleet, a number of known and suspected collaborators, including Lyman, are tried and executed by the Circle, a secret tribunal created under the executive order of President Tom Zarek to investigate and decide the fate of collaborators during the Cylon occupation of New Caprica. The rest are later pardoned by reinstated President Roslin (TRS: "Collaborators").