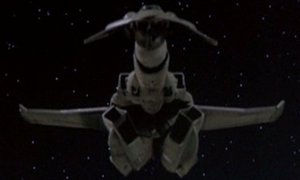 The Eastern Alliance destroyer was repeatedly noted to be far smaller that a battlestar and non-threatening as a contender. In fact, a captured destroyer was briefly impounded aboard Galactica and appeared to be comparable in size to a Colonial shuttle. However, Commandant Leiter confidently boasts to Commander Adama that many of these destroyers could take on Galactica like a wolf pack takes on its prey (TOS: "Baltar's Escape"), though this has never been proved nor disproved.

After Leiter's destroyer escapes, a Viper squadron is dispatched to pursue the destroyer. However, the conclusion of the war between the Eastern Alliance and the Terran Nationalists presumably rendered both the Viper squadron's mission, and the mission of the destroyer itself, unnecessary (TOS: "Experiment in Terra").