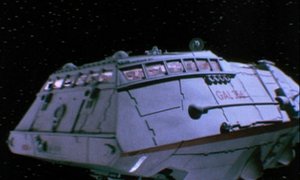 GAL 356 is a dependable Galactica shuttle in the Fleet in both the Original Series and Galactica 1980.

It can be seen in almost every episode. In fact it's such a popular ship that even Commander Cain had one just like it, which he travels on when Pegasus encounters Galactica (TOS: "The Living Legend, Part I")!

Oh, and did you know that it can even traverse universes, as it shows up in the Re-imagined Series and in Buck Rogers in the 25th Century!