For other items of the same name, see: Experiment in Terra (disambiguation)

A longer, television-movie version of "Experiment in Terra" with scenes from other episodes, such as Galactica 1980's "The Return of Starbuck".

This section covers the differences between the series episode of "Experiment in Terra" and this television movie. 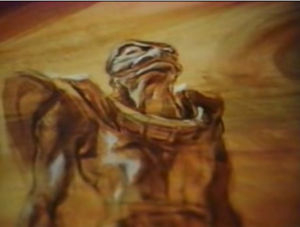 Content not included in the episodic version of "Experiment in Terra"

Patrick Macnee: There are those who believe that life here on Earth began out there. Far across the universe with tribes of humans, who may have been the forefathers of the Egyptians, or the Toltecs, or the Mayans, that they may have been the architects of the great pyramids, or the lost civilizations of Lemuria or Atlantis. Again and again we launched our spacecraft into the solar system to probe and search for a planet having the same composition as our Earth. The planet with the air and soil so essential to life, as well as the necessary geological processes. A planet from which extraterrestrial visitors to Earth might live, or might once have lived, and although it became more apparent with each space exploration that such a planet could exist, it always eluded us.
It was on one such routine expedition that the astronaut, [indiscernible], accidentally saw an object floating in space. Disregarding the space hazards, he retrieved the object, which upon examination proved to be a log book from the battlestar Galactica.
It was the first documented proof that life as we know it, as well as other forms, exist or existed in the galaxy. But in the galaxy, as on Earth, where ever mankind is present, love and warfare prevail, as well as mankind's dream of everlasting peace.

Adama: In case we do not survive, this is a true record of the war between the Cylon Centurions and the human race in the star system. Commander Adama, Battlestar Galactica.
Somewhere in sometime in our galaxy, there evolved an intelligent race of serpents known as Cylons. First they created machines of super-intelligence: the Cylon Centurions. Then they created the ultimate in machinery technology, the ruler known as the Imperious Leader. But due to a slight error in their programming, the Imperious Leader turned against his creators and ordered his subjects to exterminate all human life forms. Thus began a war with the Cylon Centurions that erased all of the human race in the star system.
One of our greatest defeats was the Battle of Molecay. The Fifth Fleet, including its flagship, the Pegasus, under our great military leader Commander Cain was destroyed.
After a battle alleging to depict the Battle of Molecay:
Now there remains only one fleet of warships consisting of five flying battlestars, with the flagship, battlestar Galactica, under my command, to protect the tired and weary Twelve Colonies.
After the new Imperious Leader spares Baltar's life to explain to the humans his policy of tolerance:
Unexpectedly, the Cylon Centurions sued for peace, asking for an armistice conference. They chose the ruthless and treacherous Baltar as their liaison. And unknown to our intelligence force was Baltar's bargain with the Cylons, whereby he would rule over our colonies after we were conquered. Nor were we or Baltar aware of the Cylons' real plans.
After Adama warns Adar of the incoming ships, which attack the battlestar fleet:
And so we were taken by surprise as a thousand Cylon Centurions attacked and engaged our fleet in battle.
In order to protect our colonies, I left the fighter craft to defend the fleet and turned the battlestar Galactica toward our planet home base, Caprica. Unfortunately, while our fleet was under attack, a greater force of Cylon Centurions attacked our home planets and completely destroyed all Twelve Colonies.
The problems of this time seem almost insurmountable: we're short of fuel, water, and food. But worst of all we no longer have a home planet. After much deliberation, I've decided to set course in search of the only remaining outpost and colony of humanity in the universe. Now so that mankind in our galaxy can survive I shall someway, somehow seek out that Thirteenth Colony which lies far beyond our star system. A planet called Earth.
My immediate problem is to obtain food for the survivors and fuel for the ships, without endangering my people or my Fleet. Carillon is the only logical answer. It's an old mining outpost abandoned by the Cylons, but that too presents hazards. It is well known that the Cylons mined the only passage way to Carillon. I have no choice but to clear a channel.

As ordered by the beginning credits.

Others that are not (apparently) credited.