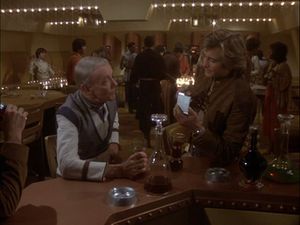 Starbuck and Chameleon at the chancery aboard Rising Star (TOS: "The Man with Nine Lives").

A chancery is a place where gambling occurs.

The new Colonial refugees, having recently escaped their worlds' destruction, encounter a chancery on the surface of Carillon. This chancery is remarkable in that, unlike other chanceries, the players can't lose.

The situation is too good to be true, however, when it turns out that the chancery is a lure that the Ovions use to capture and consume people.

The chancery is destroyed when the fire in the tylium mine detonates the planet (TOS: "Saga of a Star World").

The Rising Star is equipped with a chancery. Starbuck tries out a new pyramid system at this chancery, using a week's salary for himself and Apollo as his stake. He ends up meeting Chameleon at the chancery, and the two immediately make a connection (TOS: "The Man with Nine Lives").

Apollo and Boomer end up at the chancery aboard Rising Star in the course of trying to defend Starbuck against his murder charge. They seek out Chella, who is the pyramid dealer at table three.

It turns out that Chella is one of three people in the Fleet who are blackmailed by Ortega, the murder victim (TOS: "Murder on the Rising Star").