This page lists all characters in the Re-imagined Series who belong to the crews of either Galactica or Pegasus and remain unnamed, yet are recurring throughout the series. During the Fall of the Twelve Colonies, this launch officer oversees the deployment of Galactica's Viper Mark IIs, including Joker's and Kara Thrace's launches (TRS: "Miniseries, Night 1").

The launch officer was portrayed by Ron Blecker, military adviser to the Miniseries.

These are crew members seen manning the Situation Room during the Battle for the Tylium Asteroid (TRS: "The Hand of God"). The following characters may be identical with any of the mentioned-only characters identified by call sign or name, listed in the list of pilots. 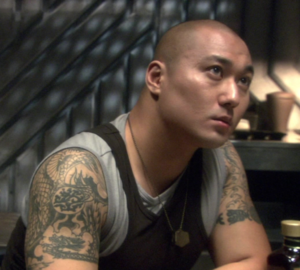 A large, tattooed Viper and Raptor pilot with a shaven head. His tattoos include a tiger on his left arm and a dragon on his right arm.

The pilot is played by Leo Li Chiang. He first appears at a briefing in "33" and is visible in most group scenes involving pilots.

Eight nuggets are recruited in "Act of Contrition" to fill out the ranks, including Kat, Hot Dog and Chuckles. Five of them were not named. 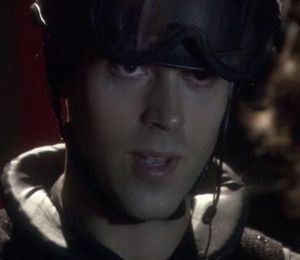 When Gaius Baltar is held in Galactica's brig, Lieutenant Felix Gaeta cannot sleep he dresses and heads for the brig. This Marine on guard stops his advance (TRS: "Taking a Break From All Your Worries"). When freedom of assembly is restricted, he is put on guard to stop members of the Cult of Baltar from entering their quarters. When Baltars refuses to leave, the marine beats him up and is only stopped by Lee Adama and a Marine lieutenant (TRS: "Escape Velocity").

This Marine is portrayed by Steve Lawlor. This Marine lieutenant escorts Lee Adama to the Cult of Baltar quarters, where Adama stops another Marine from beating Gaius Baltar and informs the people that freedom of assembly has been restored (TRS: "Escape Velocity"). He was on board of Sharon Agathon's Raptor, sent to Hitei Kan when the ship mutinied against installation of Cylon FTL technology, and then to Colonial One to arrest Tom Zarek (TRS: "A Disquiet Follows My Soul").

This marine is portrayed by Hector Johnson. This is the first Marine officer to appear since Lieutenant Terry Burrell. 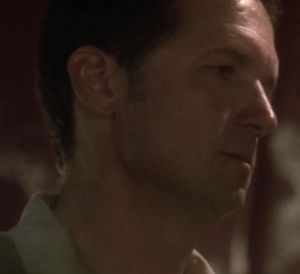 This Marine is in charge of the investigation on the Sons of Ares' assault on the Cult of Baltar. Gaius Baltar lashes out at him for not doing everything he can to find the perpetrators and calls him "Mr. Officious" (TRS: "Escape Velocity"). This unnamed Marine, credited as Adama's Corporal and referred to in dialogue as "Corporal", appeared in several episodes in Season 3, including Exodus, Part I and was credited in "Revelations".

This unnamed Marine is later present in the rec room when Felix Gaeta talks to Kara Thrace, threatening her that there will come a "reckoning". Gaeta then tells the others to close the hatch to the room, as they need to talk. The marine is later guarding Tom Zarek's cell when Gaeta comes there to conspire with Zarek, indicating that he is a member of Gaeta's conspiracy (TRS: "A Disquiet Follows My Soul").

This marine is portrayed by Barry Nerling. 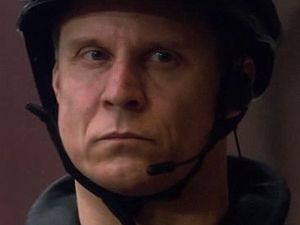 This Marine is a member of Felix Gaeta's mutiny against Admiral Adama. He is initially seen along some civilians and Marines, raiding a Weapons locker. Along with Charlie Connor and another marine he later captures Lee Adama and is ordered by Connor to aim his gun at Lee. Then, Kara Thrace suddenly appears and shoots him in the head, killing him (TRS: "The Oath").

A Marine appears clearing the halls of armed civilians. It is unknown whether he is participating in or resisting the Mutiny. (TRS: "The Oath")

When Admiral Adama is rescued from the hangar deck launch tube, an unnamed Marine alongside Aaron Kelly and Sharon Agathon is securing the disarmed Marines.