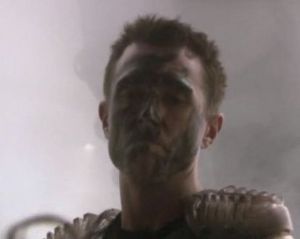 The leader of the Sons of Ares

The Sons of Ares are a militant fundamentalist group, dedicated to Ares, the God of war. Admiral Adama describes the group as "brutal" (TRS: "Escape Velocity").

The group appears to be in possession of certain weapons including firearms and smoke grenades, and appears to know about military protocol onboard Galactica, though the reasoning behind this is unknown. Several members of the Sons of Ares throws a smoke grenade into the room where the Cult of Baltar is located, and raids the area with the intention of finding Gaius Baltar. However, they run out of time and are forced to retreat. Baltar becomes aware of who they are after finding their graffiti on a wall (TRS: "Escape Velocity").

Several months later, Baltar's cult has another hostile confrontation with the Sons of Ares (along with Enzo) in Dogsville. After Baltar and his cult hand out food to the starving people in Dogsville, a contingent arrives and forces the cult to give them all the food, before getting out. Baltar then manages to appeal to Adama to give his group weapons in order to prepare for another confrontation with the Sons of Ares (TRS: "Deadlock").

If such a confrontation occurred prior to the dissolution of the Fleet at Earth, it has not been chronicled.