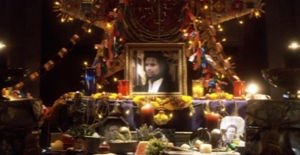 The shrine in the cultists' commune.

The Cult of Baltar[1] are a growing group of Colonials within the Fleet who believe Gaius Baltar to be a messianic figure for the "one true God".

This cult, which began sometime after Gaius Baltar's capture by the Colonials and likely as a result of both Baltar's book and legal proceedings, contains a majority of nubile, well-proportioned young women, with a smattering of male supporters, also athletic (over time the cult appears to expand slightly beyond this demographic). Members of this cult use an abandoned dry stowage compartment located on deck eight, section fourteen on Galactica as their commune, where they have erected a shrine with a large, string-lighted star and a photo of Baltar taken during his position as president of the Twelve Colonies ("He That Believeth In Me", "Escape Velocity").

Baltar's initial reaction to this cult is one of fear and loathing; he initially desires to leave, finding himself willing to be despised and hated by his fellow men rather than being stuck in the commune, which he likens to a "loony bin". However, he soon finds himself convinced by Virtual Six to embrace his new role as the cult's leader, particularly when Jeanne's deathly-ill young boy, Derrick, miraculously and completely recovers from his viral encephalitis (TRS: "He That Believeth In Me"). 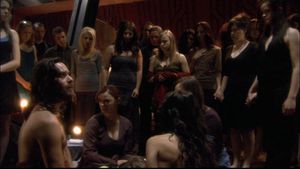 The first indications of this cult are shown to Baltar himself just before his trial, as five devotees (including Jeanne) visit him in the brig, and over 30 wrote to him (TRS: "Crossroads, Part I").

Jeanne and two other women attend the trial as spectators (TRS: "Crossroads, Part I"). These women earn a stare from Laura Roslin during Lee Adama's testimony, which Jeanne (the then-de facto leader of the cult) returns.

After applauding Baltar's not guilty verdict, they whisk Baltar away to his "new life", when Galactica experiences power-loss after their FTL jump to the Ionian nebula (TRS: "Crossroads, Part II"), and bring him to the commune. At the commune, Baltar's needs and appetites are provided for by the cultists. At Virtual Six's urging, Baltar begins to reiterate his views on the class warfare within the Fleet, the "aristocracy", and the fact that there is only one true God. Baltar further contends that the Lords of Kobol and other religious trappings were created by the ruling elite to suppress the lower-class.

His role as the messianic idol in this cult is emboldened by his prayer, where he offers to exchange his life so that Derrick may live, and the fact that his prayer appears to result in Derrick's miraculous recovery (TRS: "He That Believeth In Me").

The "bird-like" symbol of the cult, as seen on a drapery in the commune.

At the outset, the cult's belief system seems to be somewhat vague, other than a messianic view of Baltar. Over time Baltar begins to flesh out a more well defined belief system, setting his Cult in conflict with the "old gods". This is done at the behest of Virtual Six and, curiously, Baltar's own Virtual Baltar. Like with the majority of Baltar's actions, Virtual Six appears to be the one truly in control.

Baltar tells his followers that there is something in the universe that loves them, which he calls "God", and that they can also see this "singular spark that dwells in the soul of every living being" by looking deeply into themselves. He urges them to accept and embrace their faults, to love themselves, because if they don't love themselves, they couldn't love others. Influenced by Tory Foster's words, Baltar thinks that all of them are "perfect" (TRS: "Escape Velocity"). After that, Baltar's sermons are being broadcast throughout the ship, and likely the entire Fleet on the wireless (TRS: "The Road Less Traveled").

Additionally, the cult has a formal bird-like symbol (pictured right), which the cultists begin painting as Baltar attacks a mainstream temple (Escape Velocity) and later adopting it on shrouds and other draperies (The Road Less Traveled). The symbol represents a "gull," which is an acronym for "grace, unity, life, and love" (Daybreak, Part II Podcast).[2]

Reaction of the Fleet

The cult soon becomes the target of the Sons of Ares, a violent, likely religious, group that attacks and vandalizes the commune. In retaliation, Baltar disrupts a temple service.

To prevent such civil unrest in the future, President Roslin authorizes an emergency measure, forbidden assemblies of groups larger than twelve. On Galactica, Marines prevent Baltar's followers from gathering in their rooms, causing a tense confrontation. However, some Quorum delegates, such as Lee Adama and Reza Chronides, find this religious discrimination troubling are willing to tolerate the cult as long as they stay peaceful. They open the issue to a full vote in an emergency session and the Quorum rescinds Roslin's order (TRS: "Escape Velocity").

After the disappointing discovery of Earth, Baltar expressed anger at God for breaking his promises and abandoning his people (TRS: "A Disquiet Follows My Soul"). This change of view towards God appears to have been incorporated into the cult's theology (TRS: "Deadlock").

The number of people who attend Baltar's speeches continues to grow, and includes both civilians and members of Galactica crew. It is unclear whether all are official members of the cult. Such attendees include Brendan Costanza and Galen Tyrol (TRS: "A Disquiet Follows My Soul").

The cult appeared to stay largely neutral during the attempted coup (The Oath, Blood on the Scales), but Roslin was permitted to use the group's radio to address the fleet. During his brief exile on the Cylon baseship Baltar reveals his true contempt for his cult's devotion, although he expresses guilt for abandoning them.

Shortly before the Battle of the Colony, Baltar finally decides to turn the cult over to Paulla Schaffer. Baltar stays on Galactica to take part in its defense while the rest are evacuated (TRS: "Daybreak, Part II").

In addition to various women with a smattering of male participants, notable members of the cult include: