This article explains the legislative body in the Re-imagined Series. For information on its Original Series counterpart, see Quorum of Twelve (TOS). 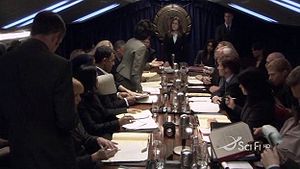 The Quorum of Twelve in its last regular meeting space, aboard Colonial One.

The Quorum of Twelve is a unicameral deliberative body[1] that grants each of the Twelve Colonies one elected representative, who votes on and brings issues to be discussed. The scope of these issues, in the aftermath of the Fall of the Twelve Colonies, is likely to be quite broad due to the lack of any other organized political bodies.

In practice, the Quorum is the counterpoint to the President of the Twelve Colonies. While the executive branch has great power, the Quorum likely needs to ratify all laws devised by the president and the cabinet. It is also able to veto presidential provisions.

The Quorum was instituted by the Articles of Colonization 52 years prior to the fall of the Colonies.

After the loss of the Quorum under President Adar, President Roslin reestablishes a new Quorum on Colonial Day. Its representatives, elected by the populous, include: 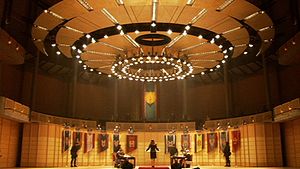 The Quorum of Twelve meets for the first time after the fall of the Colonies in the Cloud 9 ballroom.

Secluded in his lab, Gaius Baltar seems unaware that he has even been nominated for the Caprican post until he is made aware of the decision.

One of the primary issues of the new Quorum was the election of a vice president as the Quorum was responsible for the confirmation of the successor to that office. If there is a tie, as is the case during the campaign of Tom Zarek and Gaius Baltar, the president was the one who casts the tie-breaking vote. This Quorum of Twelve assembled on Cloud 9 (TRS: "Colonial Day").

With the loss of Cloud 9 shortly after Gaius Baltar's inauguration, the Quorum's meeting place is destroyed. A number of delegates may also have died in the disaster. The Quorum continued to meet throughout the Baltar administration until at least its surrender to the Cylons a year later on New Caprica[5]. It appears to have been dissolved at some point during the Cylon occupation[6].

President Tom Zarek oversees the appointment of a new Quorum, who later approves the transition of presidential powers from Zarek to Laura Roslin after the Second Exodus (TRS: "Collaborators").

Meeting on Colonial One with the press in attendance, now-Vice President Zarek appears to act as chairman to an unruly Quorum (TRS: "The Ties That Bind").

The representatives on this Quorum include:

Upon learning of Adama's plan to enter a permanent alliance with the Rebel Cylons in exchange for access to Cylon FTL technology to be installed on all civilian ships, Zarek takes advantage of Roslin's self-imposed absence from politics and agitates the Quorum into voting that no Cylon may board a civilian ship without the permission of its people (TRS: "A Disquiet Follows My Soul").

Later, Zarek collaborates with Lieutenant Felix Gaeta of Galactica to stage a mutiny which quickly turns bloody (TRS: "The Oath"). When the Quorum (minus Lee Adama who is at large on Galactica) does not support him and Cantrell orders him to leave, pointedly addressing him as the Vice President, he orders their execution by the marines outside the door. After they carry out this order, Zarek summons Gaeta, who is shaken out of his naievety about Zarek's motives and mourns the resulting loss of the rebellion's perceived moral high ground (TRS: "Blood on the Scales").

Instead of forming the colony-based Quorum again with new representatives, Lee Adama proposes that the Colonials are no longer defined by their home colonies but rather the respective ships they live on. President Roslin supports the idea and tasks Lee with restructuring the civilian government accordingly (TRS: "No Exit"). This idea quickly leads to the creation of the Quorum of Ships' Captains. In addition to the human captains of each surviving Colonial vessel, a Cylon representative, a Six named Sonja, is elected to this Quorum to represent the Rebel basestar (TRS: "Someone to Watch Over Me").