Lieutenant Junior Grade Margaret "Racetrack" Edmondson is a female Raptor pilot aboard Galactica. She harbors an extreme racist contempt for the Cylons, and tends to have a dark, bitter, and cynical attitude towards life.

Edmondson accompanies Lieutenant Junior Grade Sharon "Boomer" Valerii on a mission to destroy a Cylon basestar. She witnesses Valerii's attempted assassination of Commander William Adama in Galactica's CIC (TRS: "Kobol's Last Gleaming, Part II"). Immediately after, she informs the CIC staff that Valerii returned from placing the nuclear warhead inside the basestar orbiting Kobol without her helmet on and that she probably gave away Galactica's position to the Cylons (TRS: "Scattered").

During the SAR mission to Kobol, Edmondson pilots the Raptor carrying Lee Adama, encountering fire from Cylon anti-aircraft missiles. Chief Petty Officer Galen Tyrol destroys the missiles' DRADIS dish on the surface, and they fail to lock on. Edmondson's Raptor then destroys the Centurions on the ground with a missile, and recovers the trapped Galactica crewmen (TRS: "Fragged").

She aids the escape of President Laura Roslin from the brig by falsely claiming that her Raptor was having technical problems, enabling the furloughed Captain Lee "Apollo" Adama to report to the hangar bay instead of the brig per his arrest. She then helps prep the Raptor used as the escape craft for launch, but remains on Galactica (TRS: "Resistance").

Racetrack serves as ECO on Raptor 1, plotting the best point of orbital entry when taking Commander Adama to Kobol to find and meet with President Roslin (TRS: "Home, Part II"). Since then, Margaret flies basic supply runs between Galactica and the Fleet. She continues to light candles for fallen comrades in the Cylon attack. She is almost certain she will eventually die on a mission, and is more focused on taking out as many Cylons as she can before that happens (TRS: "Final Cut").

Like many others, Edmondson initially snubs Lieutenant Karl "Helo" Agathon upon his return because of his romantic relationship with the Caprica copy of Sharon Valerii. When she insults Lieutenant Kara "Starbuck" Thrace over the matter, Thrace slams Edmondson face-first into a card table (TRS: "Flight of the Phoenix"). Edmondson later offers conciliatory congratulations to Agathon for his help on the Blackbird and his suggestion to use DRADIS-absorbing carbon composites. Edmondson in a Raptor

Edmondson is particularly overjoyed when Galactica encounters the advanced battlestar Pegasus. While socializing with Pegasus pilots in the hangar bay, she fails to understand Thrace's contempt for the "scorecards" on which they tally their kills (TRS: "Pegasus"). Edmondson's Raptor rescues Lee Adama during the Battle of the Resurrection Ship, reviving him using defibrillator paddles in her emergency gear (TRS: "Resurrection Ship, Part II"). When Edmondson transports Lee Adama and a squad of Marines to check the Daru Mozu for signs of sabotage by Cylon sympathizers, her vessel narrowly escapes the ensuing explosion (TRS: "Epiphanies").

Edmondson also later flew a Raptor transporting Lee Adama back from Cloud 9 after he spent some off duty time there with Shevon (TRS: "Black Market").

During Thrace's rescue mission for the Caprica Resistance, Edmondson serves as pilot on one of the 20 Raptors to make a series of ten jumps, aided by a Cylon navigation system. Lieutenant Junior Grade Hamish "Skulls" McCall served as her co-pilot and ECO. On the first jump, Edmondson's Raptor jumps to the wrong coordinates, ending up in a gas cloud. Thrace and the main group proceed on without her. Preparing to return to Galactica, Edmondson picks up a lot of gravity distortions on her sensors and upon clearing the gas cloud she discovers a habitable planet that the Fleet could colonize (TRS: "Lay Down Your Burdens, Part I"). Though the planet turned out to be marginally habitable at best, it would later be named New Caprica, and most of the human survivors of the Fleet would settle down there permanently (TRS: "Lay Down Your Burdens, Part II").

Edmondson remains with the Fleet and flies missions to detect communications from the New Caprica Resistance (TRS: "Occupation"). She also plays a leading role in the rescue mission to New Caprica (TRS: "Exodus, Part I").

Although she is a qualified Raptor pilot, Edmondson agrees to serve as the now-recognised Lieutenant Junior Grade Sharon Agathon's ECO after the crews of Galactica and Pegasus are combined and far more pilots than aircraft are available, because she thinks being ECO is better than not flying at all. When Edmondson refers to Agathon using the callsign of her Cylon doppelgänger, "Boomer", the room of pilots gleefully offer a less controversial callsign for Sharon Agathon, including her final one: "Athena".

On her first mission with Agathon, the two make a recon flight to the Lion's Head Nebula to investigate a clue to the location of Earth. The information proves to be correct, but they also find a deserted Cylon basestar (TRS: "Torn"). After undergoing precautionary quarantine measures due to a possible viral infection, the two fly together again in the Battle of NCD2539 (TRS: "A Measure of Salvation").

Edmondson lends her Raptor talents in a harrowing series of escort flights to shepherd the Fleet through a very dangerous star cluster to a planet with desperately needed foodstuffs (TRS: "The Passage").

On a routine patrol around the Fleet, her Raptor suffers from an engine and RCS malfunction, due to impurities in its tylium fuel. Unable to regain control and on a collision course with Colonial One, she and her ECO McCall are forced to eject from the Raptor. The craft collides with Colonial One, causing moderate hull damage and several injuries, but no fatalities (TRS: "Dirty Hands").

As the Fleet approaches the Ionian nebula, Admiral Adama, worried about Cylon pursuit, tasks Raptor pickets with staying one jump point behind the Fleet to watch for Cylons. One of those patrols, Edmondson and McCall put their Raptor to station-keeping behind an asteroid and start playing Triad to pass the next twelve hours. Shortly after that a Cylon fleet jumps to their position. They manage to spin up the FTL drive and escape seconds before an enemy missile would have hit their Raptor (TRS: "Crossroads, Part I"). Shortly after, she instructs nuggets in basic Raptor operations and technology to prepare them for flying (TRS: "Crossroads, Part II").

Racetrack participates in the Battle of the Ionian Nebula, and refers to Samuel Anders not shooting down an easy Raider target as a dumb nugget mistake (He That Believeth in Me). Later, during Lee Adama's retirement party on Galactica, Edmondson enjoys a game of strip triad with Costanza and another pilot (TRS: "Six of One").

After Cally Tyrol's death, Edmondson and McCall are on a routine mission when they have another technical malfunction on their Raptor and crashland in the landing bay (TRS: "Escape Velocity").

After an uneasy truce is formed between the Colonials and the rebel Cylons, Edmondson and McCall are sent on a scouting mission to the reported location of the Cylon Resurrection Hub (TRS: "Guess What's Coming to Dinner?"). After the rebels' baseship jumps away from the Fleet, Edmondson and McCall recover Eammon Pike's Raptor, which had retreated from the battle for the Hub, discovering that Pike and his ECO are dead. She is later part of the search of the battle site, discovering several Vipers, including "Sandman"'s (TRS: "Sine Qua Non").

Following the discovery of Earth, she served as pilot for Lieutenant Louis Hoshi's lone SAR mission to locate the missing Raptor carrying Lieutenant Felix Gaeta aboard after it disappeared in an emergency jump whilst on-route to the Zephyr [[TRS|The Face of the Enemy}}.

Racetrack and Skulls join Gaeta's mutiny against Admiral Adama. Racetrack's personal motivations for siding with Gaeta are unclear, although they probably stem from her resentment over having to work with the rebel Cylons. She pilots Gaeta's ally Tom Zarek off Galactica to the safety of Colonial One. Racetrack later even stands by and allows Gaeta's followers to accost her former fellow pilot Lee Adama. However, they are interrupted by Kara Thrace who kills one of the rebel marines and wounds Skulls. Thrace holds Racetrack and the others at gunpoint and forces them to release Lee. After Thrace and Adama exit, Racetrack rushes to Skulls' aid (TRS: "The Oath").

She is briefly seen in the next episode chatting with Tom Zarek. She is also seen in the CIC with Seelix, Narcho, and Gaeta as they make plans for the Fleet to jump (TRS: "Blood on the Scales").

Several weeks later, Admiral Adama releases the mutineers in exchange for their participation in a likely-one-way mission to rescue Hera Agathon from The Colony. Racetrack and Skulls are sent on a reconnaissance mission to investigate the coordinates Adama and Starbuck retrieve from Samuel Anders. The coordinates take them to an asteroid field orbiting a black hole which protects The Colony. By observing two Baseships guarding The Colony, Racetrack and Skulls are able to pinpoint the exact location Galactica needs to jump to safely reach The Colony (TRS: "Daybreak, Part I").

She and Skulls participate in the Battle of The Colony, and Margaret asks her ECO to arm their nukes, just to be prepared. Both are killed early in the battle, however, when a piece of debris breaks their windshield. After her death, another piece of debris knocks against her ship and causes her corpse to hit the button for launching her armed nukes at The Colony, causing massive damage and causing it to lose orbit and fall into the black hole, destroying it. This ultimately fulfills Racetrack's wish to die taking out as many Cylons as possible, as her last act - albeit posthumous and accidental - was to obliterate the whole of Cavil's forces. (TRS: "Daybreak, Part II")

The incorrect spelling for Edmondson occurs here; it is, however, correct on the nameplate of the Raptor she flies. 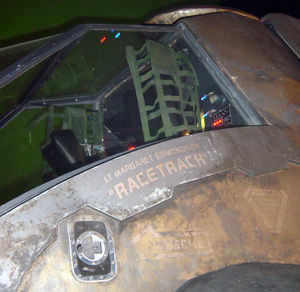 A shot of the Raptor with the correct spelling.