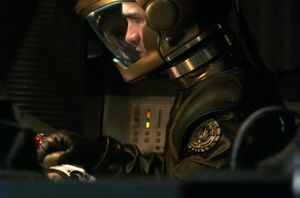 Crashdown at a Raptor ECO station.

ECOs are also trained to fly a Raptor in case the primary pilot is incapacitated or unavailable. Alex "Crashdown" Quartararo pilots his Raptor when his pilot Karma is killed (TRS: "Kobol's Last Gleaming, Part I"). Margaret "Racetrack" Edmondson has served as both pilot and ECO on several occasions ("Fragged", "Final Cut").

As Galactica initially faces chronic pilot and ship shortages, ECOs such as Agathon and Edmondson often pull "double-duty" as either pilot or ECO as assigned by the CAG. After the New Caprica exodus, this was less of an issue (TRS: "Torn"), but after the events of Gaeta's Mutiny, personnel shortages left the pilots of Raptors searching for habitable planets flying without ECOs (TRS: "Someone to Watch Over Me").