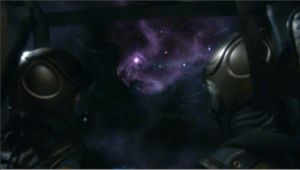 The Lion's Head Nebula as seen by Athena and Racetrack

The Lion's Head Nebula, according to the Scroll of Pythia, was used as a navigational waypoint to Earth by the caravan of the Thirteenth Tribe. The scripture reads: "And the caravan of the heavens was watched over by a great lion with a mighty blinking eye." The nebula's "eye" is actually a system of red and blue eclipsing binary pulsars that matches the scripture's description.

The Cylons first discover the nebula when Gaius Baltar tells them it might contain a clue to the location of Earth. A basestar sent to investigate finds a beacon possibly left by the Thirteenth Tribe. But when the beacon is brought on board, a disease it carries kills most humanoid Cylons, Centurions, and Raiders aboard (the mechanical Centurions are shut down as they were linked to the Hybrid), as well as severely damaging the basestar itself.

On Galactica, Lieutenant Felix Gaeta analyzes Baltar's research and briefs President Laura Roslin and Admiral William Adama on the nebula. A Raptor, manned by Racetrack and Athena, discovers the nebula and the graveyard of drifting Cylon spacecraft (TRS: "Torn").