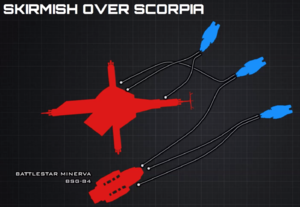 Topographical depiction of the Minerva during its first engagement with Cylons.

Minerva (BSG-84) is the first battlestar of its class, as well as that class's namesake.

During the First Cylon War, Minerva is rapidly deployed from its secondary shipyard berth over Scorpia, seeing its first engagement with three Arachne Cylon ships. The subsequent engagement destroys the secondary shipyard despite Minerva's defensive attempts, and Minerva uses the debris to shield itself from the aggressors. Closing to kill range, the incomplete Minerva goes on the offensive and aptly decimates the attacking force, unleashing volleys of ordnance while the Arachnes reload.

This engagement establishes Minerva and its class of light battlestars as capital ship killers for offensive operations during the war (Battlestar Galactica Deadlock: The Broken Alliance).[1]