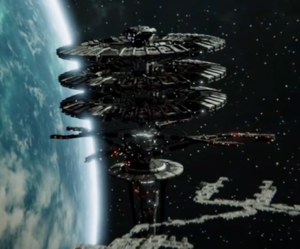 Daidalos is a mobile shipyard in operation during the First Cylon War, and is the staging ground for the construction of the Jupiter-class battlestars under Project Jupiter (Battlestar Galactica Deadlock).

Daidalos Shipyard served as the primary production facility for the Colonial Fleet until its loss over Ragnar to Cylon forces under the command of Lachesis. Amongst the casualties are Lucinda Cain, Helena Agathon and the Cylon entity known as Clothos.

Following the end of the war, Daidalos is decommissioned and its bulk is repurposed as Ragnar Anchorage.