Tamara Adama (or Adams) was the eldest child of Joseph and Shannon Adama, and the brother of William "Willie" Adama. She was killed in the bombing of the Caprica City Metropolitan Levitation Mass Transit System, but lived on in the form of a holographic avatar.

Tamara Adama grew up under the name Adams, her father having changed their family name before her birth. Adama lived with her family in the Little Tauron neighborhood of downtown Caprica City, she attended school at Promethia High School. Her family believed that she had a bright future ahead of her, Sam Adama, her paternal uncle, saying that she would "make us all proud" (CAP: "Pilot", "Rebirth", "Gravedancing"). Despite attempts to assimilate into Caprican culture, Tamara was bullied for being a "dirteater," and relayed a story on Maglev 23 regarding an altercation against a bigoted student, which ended in her kicking the bigot in his testicles (CAP: "Pilot").

When signing her name, Tamara would always put a flower on top of the T, creating an easily recognizable mark (CAP: "Ghosts in the Machine").

In her final days, Tamara helped her mother plan a birthday party for her brother, Willie. Tamara never got to attend her brother's party, dying with her mother in a suicide bombing carried out by a member of the Soldiers of the One terror group. She was survived by her father, brother, paternal uncle, and maternal grandmother Ruth (CAP: "Pilot").

Devastated by the loss of his daughter, Tamara's father Joseph Adama entered a period of mourning. During this time, Adama was introduced to Daniel Graystone, the wealthy scientist and owner of Graystone Industries. Graystone proposed to bring Tamara - and possibly even Shannon - back from the dead through the use of a resurrection program, created by his genius daughter Zoe Graystone who was also killed in the bombing. In exchange, Graystone asked that Adama - who was affiliated with the Tauron crime syndicate, the Ha'la'tha - arrange to have a piece of equipment stolen from Graystone's competitor, the Vergis Corporation. Upon receiving the equipment, Graystone scanned Adama into the Virtual World and introduced him to a replica of Tamara, created through the use of a holographic avatar (CAP: "Pilot").

The Tamara avatar (or Tamara-A) awakened in a private space in Daniel Graystone's home computer. Rushing into the arms of her father, she was at first confused, unable to remember how she got there. Soon, however, Tamara began to panic, claiming that she was unable to feel her own heart beat (CAP: "Pilot").

Incensed, Joesph Adama tore off his holoband, calling the avatar an "abomination". Graystone, though, was calm, explaining that Tamara would get used to the new sensations. Still, Adama refused to accept that Graystone could have truly recreated his daughter, and a rift formed between the two men (CAP: "Pilot").

As time went on, Joseph Adama was unable to shake the experience with the avatar, even hallucinating an image of his daughter reaching out to him. Reconsidering his initial revulsion, Adama attempted to reestablish contact with Daniel Graystone, only to have his calls ignored. Finding Graystone at the memorial service for victims of the bombing at Apollo Park, Adama asked to see the Tamara avatar again. Graystone, however, was so consumed with his own daughter's avatar and its apparent loss, that he merely assumed the Tamara avatar suffered the same fate (CAP: "Rebirth"). 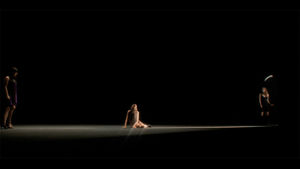 Upon actually checking the system, Graystone was surprised to find the Tamara avatar still intact in his private virtual space. However, the avatar was also discovered in this space by the Zoe Graystone avatar - transferring between the body of a U-87 Cyber Combat Unit and the virtual world. Showing Tamara out of the private space into the "V-Club", Zoe offered to help Tammy find her way home. Tamara, however, refused, venturing into the Virtual World alone (CAP: "Reins of a Waterfall").

Entering the virtual space yet again, Graystone and Adama were shocked to find that Tamara was gone. Graystone chalked it up to a computer error; however, Adama took it harder, thus widening the rift and placing both men into conflict (CAP: "Reins of a Waterfall"). 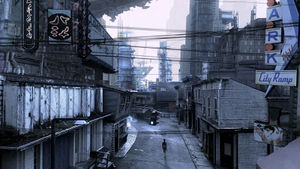 Believing she was still alive, Tamara wandered the V-World alone, searching for Vesta, a gamer who could provide answers. Finding Vesta in a game of Russian roulette, Tamara pleaded for help. Convinced she had simply fallen asleep wearing her holoband, Vespa raised her gun and fired on Tamara, thinking the pain would shock and derez her. Tamara did not derez, however, experiencing the pain of the gunshot, but quickly healing - something no avatar had previously done. Vesta promised then to help Tamara, but for a price (CAP: "There is Another Sky").

Paired with Tad "Heracles" Thorean, Tamara was sent to the gaming environment known as New Cap City, a hacked site where gang warfare persisted throughout a lawless recreation of Caprica City. Heracles brought Tammy to the hangout of Chiron, a New Cap City "fat cat" who sat on a fortune of points. Distracting Chrion's guards and even being shot, Tamara bought time for Heracles to sneak behind Chrion and steal his avatar's code (CAP: "There is Another Sky"). 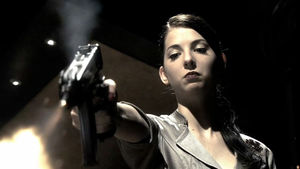 Using the code to disguise himself as Chiron, Heracles then took Tamara into Chiron's vault where they entered a code and gained most of - if not all - of Chrion's points. As they were collecting the digital coins, however, several guards stormed in, opening fire on Tamara. Resisting the gunshots, Tamara reflexively demonstrated an ability to control code, causing the guards to spontaneously derez (CAP: "There is Another Sky").

Back at Chiron's hangout, Vesta had taken over and discovered the specifics of Tamara's predicament. Demanding that she continue to serve her needs, Vesta revealed that Tamara had died some months ago in the bombing of MagLev train number 23. Despondent and unwilling to be exploited, Tamara grabbed a gun and opened fire on Vesta's guards before turning the gun on Vesta herself. Telling Heracles that he could be more than just a gamer, Tamara urged him to find her father in the real world, saying that she would be waiting in New Cap City (CAP: "There is Another Sky").

Once again on her own in the Virtual World, Tamara continued to seek answers in New Cap City. There she visited the Mysteries club and consulted the host, Cerberus who was impressed by her abilities. Still, Tamara failed to find what she was looking for and continued to wander, placing her distinctive signature wherever she went (CAP: "Ghosts in the Machine").

Having been contacted by Heracles in the real world, Joseph Adama learned of Tamara's presence in New Cap City and quickly entered the game. After Herecles derezzed, Adama located a new guide "Emmanuelle" and the search for Tammy began in earnest. Upon the discovery of Tamara's flower signature covering a wall outside Mysteries, Emmanuelle raised the question of Tamara's desire to be found, wondering if she hadn't made New Cap City her home (CAP: "The Imperfections of Memory", "Ghosts in the Machine"). 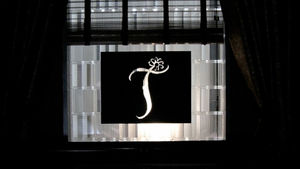 Adama persisted, becoming addicted to the hack called amp and dropping out of his own life to constantly search for his daughter. Concerned for Adama's descent into addiction, Emmanuelle - really Adama's personal assistant Evelyn - created a signal depicting Tamara's signature and drawing to the New Cap City version of her family apartment. There, Evelyn convinced Tamara to help her father move on (CAP: "End of Line").

Bringing Adama to his New Cap City apartment, Emmanuelle/Evelyn reunited Joseph with Tamara. The reunion, though, was short lived. Tamara insisted that her father stop destroying his life by following her, telling him to focus on William and not on her. She then shot herself in the chest, seemingly sacrificing her life, before shooting her father, forcing him to derez and banishing him from New Cap City (CAP: "End of Line"). 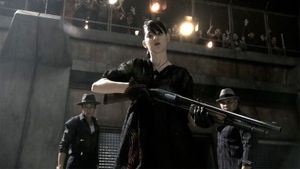 Word of Tamara's immortality and apparent ability to control code spread throughout New Cap City created a group of users loyal to her. Now referred to as the "Deadwalker", Tamara commanded much support in the game, with some users taking on protective roles, their foreheads branded with Tamara's mark (CAP: "Unvanquished").

Having learned more about her demise in the real world, Tamara came to believe media portrayals of Zoe Graystone as the bomber of the Caprica City Maglev. When the Zoe avatar appeared in New Cap City searching for her, Tamara met Zoe in the ruins of Atlas Arena where she unleashed followers of hers, angry about the bombing. Letting her followers attack and beat Zoe horribly, Tamara vented her rage at being murdered. Zoe, though, withstood the beating and, following brutal hand-to-hand combat with Tamara, convinced the Deadwalker to join her in the pursuit of a common destiny (CAP: "Things We Lock Away").

Acknowledging it as a breeding ground of moral decay and corruption, Tamara and Zoe take it upon themselves to "clean" New Cap City. Appearing nightly at the den of iniquity called "Sinny McNutt's Slash & Cut", Tamara and Zoe engage in combat with its patrons, opening fire on those who are unwilling to leave and derezzing them from the game. The notion of encountering the girls at the bar is a draw to users, who hope to either kill them or be killed by them - either way becoming famous (CAP: "The Dirteaters").

The notion of Tamara and Zoe as "Avenging Angels" quickly spreads into Caprican popular culture. As T-shirts appear on the streets of Caprica City bearing the likeness of Tamara and Zoe, Daniel Graystone becomes aware of the phenomenon and enters V-World to find his daughter. Catching a glimpse of Daniel at the Slash & Cut Bar, Tamara and Zoe flee, but not before confirming their existence to Graystone (CAP: "The Dirteaters").

Afraid of being found by Daniel, Tamara suggests they leave New Cap City for other parts of V-World. Zoe, however, rejects the notion, saying that the two had become gods there. Vowing to "forsake these motherfrakkers", Tamara and Zoe use their ability to control code to destroy and reconfigure the urban setting, turning New Cap City into a fortress upon a mountain (CAP: "The Dirteaters").

Daniel manages to snatch Tamara into a black space and asks her to give Zoe a message from him, but Zoe appears and slashes him out of V-world. Daniel, his wife Amanda and Tamara's uncle Sam then enter the transformed New Cap City to find the girls. Sam is secretly planning with Evelyn to kill Tamara so that Joseph does not become obsessed again (CAP: "The Heavens Will Rise").

The three survive virtual dragons created by Zoe to attack them and a long trek towards the girls' fortress before Sam's true motives are exposed and Amanda shoots him out of the game so that he cannot threaten Zoe. Zoe's parents then decide to change tactics and wait for her to come to them. After a heated exchange, Zoe decides to consider going back to them. She soon does so, re-entering her U-87 body and rescuing her parents from Clarice Willow[2] (CAP: "Here Be Dragons", "Apotheosis")