Serge is the robot butler of the Graystone Family at their Caprica home in the years prior to the Fall of the Twelve Colonies.

Unlike Graystone Industries' experimental U-87 Cyber Combat Unit and the later Cylons, Serge is distinguished by a markedly non-humanoid appearance, featuring a rounded body and single eye, similar to the lens of a camera. However, Serge is equipped with a simulated male voice, and male pronouns (he/him/his) are used to describe the robot. Serge's locomotion is provided by a single wheel, which allows him access to all levels of the Graystones' large estate (CAP: Caprica Pilot, "Rebirth", et al).

Serge is linked with the Graystone Estate's computer and security network, in essence making him the embodiment of the "smart" home. He is able to communicate with the residents of the home both in person and through an intercom and is capable of performing a wide array of functions including granting or denying access to visitors, fetching food and drinks, and remote controlling home operations. Serge can also read back biographical and historical information, scan television news for specific references, and serve as a voice interface for the Graystones' personal computer system (CAP: "Pilot", "Rebirth", "The Reins of the Waterfall", "Know Thy Enemy", "Unvanquished", "The Dirteaters").

For emergencies, Serge is equipped with a small weapon housed within a compartment on the side of his body and is able to make outgoing calls to emergency services (CAP: "Here Be Dragons"). 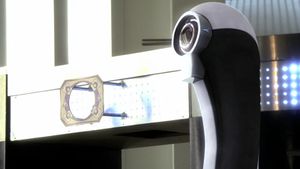 Unlike Cylons, Serge does not possess full sentience, though he is highly intelligent as well as intuitive to human emotion. Amanda Graystone complains that her husband, Daniel Graystone has programmed "all sorts of weird stuff" into Serge. This includes Pyramid slogans and curse words such as frak. Daniel Graystone jokingly claims to believe that Serge has a crush on the U-87 (CAP: "Know Thy Enemy," "Rebirth").

In a deleted scene from the episode "Reins of a Waterfall," Serge recognizes Zoe Graystone inside the U-87 body. Keeping Zoe's secret, Serge helps Zoe create a wireless link between the robot body she inhabits and the virtual world. Serge's knowledge of Zoe may account for Daniel's claim that he has a crush on the U-87 as well as Amanda's complaint about Serge being "weird."

Upon meeting Serge, various guests to the Graystone residence react differently. While Samuel Adama greets Serge with amusement, some visitors - like Tomas Vergis - ignore Serge entirely. Upon her first encounter with Serge, Sister Clarice Willow expresses bewilderment, unsure as to how to respond to the robot and calling his name "unfortunate" (CAP: "Unvanquished", "Know Thy Enemy", "Ghosts in the Machine"). 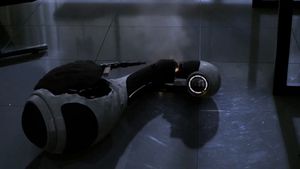 Willow later interacts with Serge in a much more hostile setting, having broken into the Graystone home with her husbands Olaf and Nestor Willow. Intercepting them as they enter through a smashed window, Serge informs Willow and her husbands that they are "not welcome" and warns them that they had fifteen seconds to vacate the premises. Aiming his gun directly at them, Serge proceeds to call the authorities but is shot by Nestor and severely damaged (CAP: "Here Be Dragons").