Evelyn was Joseph Adama's assistant and close friend in the years leading up to the First Cylon War. She was also the New Cap City persona known as Emmanuelle, Adama's guide and partner in his search for the avatar of his deceased daughter, Tamara Adama. As time passes, she and Joseph Adama develop a relationship resulting in Joseph's second marriage.

After the death of William "Willie" Adama, she marries Joseph, with whom they have a son, William "Bill" Adama, who is named after both his grandfather and deceased half-brother.

When Joseph Adama was in law school, Evelyn bought Joseph a cigarette lighter engraved with his name. The lighter was passed on to William, who considers it a good luck charm (TRS: "The Hand of God," CAP: "Dirteaters").

Evelyn worked for Joseph's Caprican law practice, acting as a personal assistant, associate and sometimes investigator for several years. Despite having been repeatedly promised that she would never have do it again, Evelyn grudgingly acted as secretary from time to time, delivering Adama coffee. Primarily, Evelyn arranged Adama's affairs, making sure drops were made to Caprican judges in return for judicial favors (CAP: "Reins of a Waterfall," "Know Thy Enemy").

In addition to their close working relationship, Evelyn and Joseph shared a close personal relationship that bordered on the romantic (CAP: "Reins of a Waterfall," "Know Thy Enemy").

Following the loss of his daughter Tamara in the MagLev bombing, Evelyn watched helpless as Joseph descend further into mourning and become consumed with his search for Tamara's avatar in the Virtual World construct known as New Cap City (CAP: "Caprica (pilot)," "End of Line"). 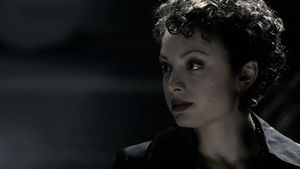 In order to intervene in Adama's growing obsession, Evelyn created a persona for herself that would allow her to keep watch over Joseph in New Cap City. Calling herself Emmanuelle, Evelyn chose a new physical appearance, and a harder, more streetwise identity (CAP: "The Imperfections of Memory).

Introducing herself as an associate of Tad "Herecles" Thorean, "Emmanuelle" offered to act as Joseph's guide, helping him to search for Tamara's avatar. Helping Adama chose a better wardrobe in which to infiltrate New Cap City, Emmanuelle lead Joseph to the virtual nightclub Mysteries and introduced him to amp, a performance-enhancing (though highly addictive) hack. Using amp, Joseph eliminates the crowd and guards at Mysteries in order to interrogate the owner, Cerberus, as to the whereabouts of his daughter (CAP: "Ghosts in the Machine"). 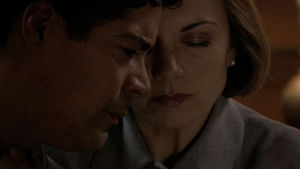 Still coming up with few results, Evelyn as Emmanuelle continued to observe Joseph's downward spiral and his burgeoning addiction to amp. Realizing the search and her help were doing more harm than good, Emmanuelle devised a plan to lure the Tamara avatar to the New Cap City version of her Little Tauron apartment. There, Emmanuelle explained the damage that had been done to Tamara's father (CAP: "End of Line").

Leading Joseph to his apartment in New Cap City, Emmanuelle was present as Tamara-A shot herself in the chest, then turned the gun on her father - faking her own death and ejecting Joseph from the game (CAP: "End of Line").

In the real world, as Joseph reeled from losing his daughter all over again, Evelyn was there to comfort him (CAP: "End of Line").

Following the apparently permanent loss of Tamara, Evelyn and Joseph began a romantic relationship. While she continued to keep his professional life running, Joseph's mother-in-law, Ruth, believed that Evelyn was good for Adama's personal life and arranged for the two to have some time alone. As the two worked on paperwork relating to the recent Ha'la'tha alliance with Graystone Industries, Evelyn and Joseph gave in to their passions and made love in Adama's apartment (CAP: "False Labor").

After the Guatrau discovers Sam and Joseph's efforts to smuggle U-87 Cyber Combat Units to the Tauron resistance, he orders them killed. After Ruth thwarts an assassination attempt by a Ha'la'tha soldier, Evelyn, Joseph, Sam and Willie Adama begin their flight into hiding. During an attempt to secure funds to do this from Sam's former place of business, they are intercepted by Ha'la'tha soldiers with orders to kill the Adama brothers. Feeling that they needed help, Willie impulsively dashes from the car to help, and Evelyn is unable to stop him. Willie's impulsive action results in his own death (CAP: "Here Be Dragons").

Within a year of the incident, Evelyn and Joseph marry and name their only son in memoriam of Joseph's first son and father: William Adama (CAP: "Apotheosis").