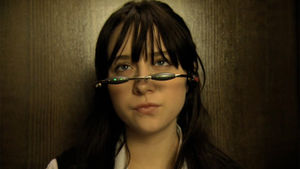 A holoband is a user interface technology that allows for a seemingly fully immersive virtual reality experience in a space known commonly as V-world. Unlike other interfaces, the end-user themselves are implanted into a virtual realm of their choosing, interacting as an avatar of themselves as their bodies are digitized via scanner following the purchase of this device (CAP: "Pilot").

Holobands are worn in front of the eyes and secured on the bridge of the nose and behind the ears, similar to eyeglasses. Real-world sounds and sights can interfere with the experience (CAP: "Know Thy Enemy"), so users must keep their eyes closed (CAP: "Pilot").

The device was invented by Daniel Graystone. The success of the technology made Graystone a celebrity scientist, who frequently appeared on television and in other media. An interactive avatar of Graystone in the halls of Graystone Industries appears the first time a holoband is used, providing a simple user's guide and directing the users to popular and legally licensed V-world sites (CAP: "Know Thy Enemy").

Holobands have become a prominent technological and economic presence in Caprican society during 42YR (58 BCH). For a time, holoband devices and associated V-world site development accounted for sixty percent of Graystone Industries' revenue (CAP: "Gravedancing"). According to the The Caprican, holobands can be found in every classroom in the Zoe Graystone Computer Science Wing of Apollo University.[1] 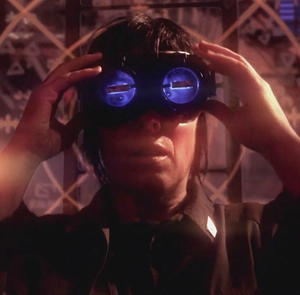 Later, during the First Cylon War circa 58YR (42 BCH), holobands were used by military units to conduct briefings, as well as to train pilots in combat simulations. By the 10th year of the Cylon War, pilots were trained in V-world simulations using the newer Mark III Viper craft.

Military-issue holoband apparatuses appeared in the form of goggles with specialized lenses, allowing the user to be immersed in virtual constructs while being able to see out of them when required (Blood and Chrome).

After the Cylon War ended in 60YR (40 BCH), the technology was likely abandoned during the post-Armistice era as Colonial society became overly cautious and developed phobias over integrated technology (TRS: "Miniseries").