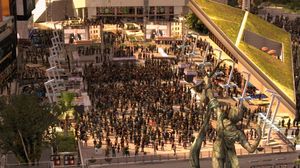 On 7 Junius, Y42, a large memorial service is held at Apollo Park in honor of the victims of the STO bombing of MLMT Train #23. Despite some hesitance and the fact that Graystone Industries sponsored the event, Daniel and Amanda Graystone attend the service in memory of their daughter, Zoe Graystone. Deeply disturbed by evidence indicating her daughter's involvement with the STO, Amanda Graystone takes to the podium and declares that Zoe was a terrorist inspiring a riot. As the crowd moves on Amanda, the Graystones are barely able to escape Apollo Park with their lives (CAP: "Rebirth").