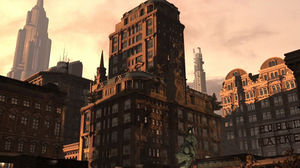 Apartment buildings and the public market in Little Tauron.

Little Tauron is a neighborhood in Caprica City, Caprica before the Fall of the Twelve Colonies, notable for its large population of Tauron immigrants.

The area is located in downtown Caprica City and consists of a string of open markets and businesses, as well as older, brick apartment buildings - a stark contrast from many of Caprica City's more modern architecture (CAP: "Pilot", "Rebirth"). Many of the businesses cater to its Tauron residents, with signage printed in both the Caprican and Tauron languages (CAP: "Rebirth").

In the years before the First Cylon War, Little Tauron is a hub of activity for the Ha'la'tha; members of the Tauron crime syndicate walking freely and with near impunity despite the presence of a nearby Caprica City Police substation (CAP: "Rebirth"). The back room at Goldie's Off Track Betting is used by the Ha'la'tha as a meeting place and hangout (CAP: "Reins of a Waterfall"). Ha'la'tha enforcer Sam Adama in particular considers Goldie's his place (CAP: "Here Be Dragons").

Sam Adama's older brother, Joseph Adama, lives in Little Tauron with his wife Shannon, daughter Tamara, son Willie, and mother-in-law, Ruth at 615 Olympic Street #3 (CAP: "Pilot", "There is Another Sky") . Following the deaths of Shannon and Tamara, Adama continues to live in the family's apartment, braving an assassination attempt there before ultimately watching his son Willie die from a gunshot wound to the abdomen in the back room of Goldie's (CAP: "Here Be Dragons"). Despite such tragedies, Adama stays in Little Tauron, living in the apartment on Olympic Street with new wife Evelyn and young son William for at least several years (CAP: "Apotheosis").

Tad "Herecles" Thorean works in a grocery store in Little Tauron (CAP: "The Imperfections of Memory").

The area was also recreated as a near perfect - if rundown - version for the illegal holoband site, New Cap City; the virtual version of the Adamas' apartment in particular being inhabited by an "amphead" (CAP: "Ghosts in the Machine", "End of Line").