Ben Stark is a student at the Athena Academy on Caprica, a private religious school. He and a number of other bright students, including Lacy Rand and Ben's girlfriend, Zoe Graystone, are introduced by the school headmistress, Sister Clarice Willow, to the illegal Soldiers of the One monotheistic cult. He is the best friend of Keon Gatwick, who is likewise a member of the STO.

Ben becomes a fanatical monotheist and ostensibly goes with Zoe to leave Caprica and live on Gemenon. Without Zoe's prior knowledge of his intent, Ben blows up the train they are riding with a bomb strapped to his torso (CAP: Caprica pilot).

During a public ceremony held on Junius 7th denoting the one month marking of the tragedy, Natalie Stark, Ben's mother, gives Amanda Graystone various objects belonging to her daughter Zoe that were found in Ben's room, including a large foldable gold STO infinity symbol. Amanda had been completely unaware of Ben or of the STO in Zoe's life, and in her grief and shock at the revelation, she falsely tells the assembled victims' families that her daughter was the bomber of Maglev 23 (CAP: "Rebirth").

Ben's involvement with the STO almost came to the attention of the Global Defense Department a year before the bombing, but was missed due to procedural errors. On Aprilus 9th, YR41, Ben was picked up for a post-curfew violation by the GDD and was found with what turned out to be bomb making materials, which were explained away by Ben to his interrogator, Agent Youngblood, as model rocketry components. He was let go on a warning due to lack of probable cause and the plausibility of his explanation. A videotape recording of the interrogation would go unnoticed for over a month after the bombing because Agent Youngblood spelled his surname "Starke" with an "e" and consequently misfiled it. Youngblood herself had totally forgotten about Ben. Fearing departmental embarrassment and to protect his partner, the tape is destroyed by Agent Jordan Durham, following a broad hint by the director of the GDD (CAP: "Reins of a Waterfall"). 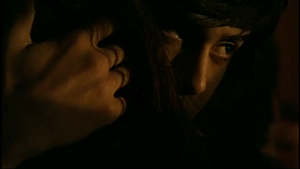 A previous report regarding the pilot noted that he uploaded his memories into an online holographic avatar named Ben-A, who has contact only with Sister Clarice Willow.[2] This plotline exists solely as a deleted scene viewable on the DVD.