Olaf Willow is one of Clarice Willow's husbands, and a member of the Soldiers of the One terrorist group.

Like his spouse Nestor, Olaf is highly adept with computers. Olaf produces a swipe drive with Nestor, in order for Clarice to copy the contents of Daniel Graystone's home lab computer, including Zoe Graystone's computer program for creating sentient V-world avatars (CAP: "Know Thy Enemy"). Olaf's involvement in STO-related activities expands beyond computers as Clarice comes into conflict with Barnabas Greeley for control of the organization on Caprica. After Clarice is granted the official sanction of the Monotheist Church leadership, Olaf assists Clarice in hunting down Greeley and his followers, and in taking one follower, Lacy Rand, captive (CAP: "Retribution"). He subdues Rand when she attempts to escape from the Willow house, and later puts her into a car for a flight to Gemenon and eventual STO training (CAP: "Things We Lock Away"). Sometime later, he and Nestor take their spouse Mar-Beth's body away after she is murdered by Clarice, and arrange for the body to be mutilated and sunk (CAP: "Blowback").

The V-world game New Cap City is one of Olaf's favorite pastimes. With the rise of the "Avenging Angels" in New Cap City, Olaf is eager to challenge them. He waits for them with Nestor, armed with a sword, but when the Angels aim handguns at them, Olaf is taken by surprise and his character is killed and permanently removed from the game, much to his irritation over instantly losing several years of work. He and Nestor are both scolded by Clarice for wasting their time on the game, and later for producing disappointing designs of the V-world heaven that is supposed to greet the avatars of future STO martyrs (CAP: "The Dirteaters").

While reviewing arrangements for an attack on Atlas Arena, Olaf defends the planned attack against Nestor's doubts about its morality, calling the bombers' acts of martyrdom an honor. Later, it is discovered that Clarice's holoband containing information about the attack had been stolen and replaced, and Olaf realizes that the only possible perpetrator is Amanda Graystone, who had recently been staying at the Willow house. Olaf concludes that Mar-Beth was killed for nothing, and openly criticizes Clarice for her stupidity (CAP: "The Heavens Will Rise"). He joins Clarice and Nestor in a nighttime invasion of the Graystone Estate in an attempt to eliminate Amanda, providing firepower as well as computer expertise in overriding the house's security systems. Olaf desperately tries to convince Clarice that pleas by Amanda's husband Daniel to learn about God are nothing more than a stalling tactic, but to no avail. During this time, the U-87 prototype containing the Zoe avatar awakens and kills Nestor. Olaf fires a shot into one of the robot's main fluid lines, slowing it enough to allow for him and Clarice to escape (CAP: "Here Be Dragons"). Once they are safely at home and able to make final preparations for the attack, Olaf understands that he is being sent to die as a martyr at Atlas Arena, but that Clarice will stay behind, to live. He briefly but angrily lectures Clarice for her cowardice.

Like the other suicide bombers, Olaf slips into the arena with the help of STO allies among the security staff. During the pyramid opening ceremonies, a team of U-87 Cylons attached to the Caprican marines under the command of Daniel Graystone land, seek out the bombers, and eliminate all but Olaf with sniper shots. Olaf looses his detonator amid the chaos among the crowd. Finally he locates it, rises, and sees six Cylons converging on him. He yells out, "The one true God will drive out the many! So say we all!" and as the Cylons jump on him, Olaf activates the explosives strapped to his torso, killing himself and destroying the Cylons, but causing little additional damage.

In the heaven program, Olaf's own V-world avatar is automatically activated by his death, like those of the other martyrs. He emerges into a world that has already been ripped apart by the Zoe avatar, and almost immediately destabilizes, never to be recovered (CAP: "Apotheosis"). 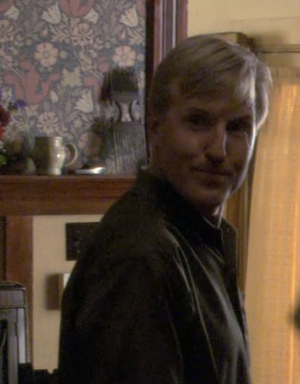 Olaf as introduced in "Rebirth," portrayed by an uncredited actor before it was recast.

Although first introduced in CAP: "Rebirth", the character was portrayed by an unidentified actor before the role was recast with Panou beginning with CAP: "Gravedancing".