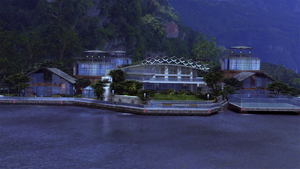 View of the estate from the Caprican Bay (CAP: "Pilot").

The Graystone Estate is the Caprican residence of the Graystone family in the years prior to the Fall of the Twelve Colonies.

Daniel and Amanda Graystone had previously lived in a flat in Cloverdale but moved into a house following the birth of their daughter, Zoe (CAP: "There is Another Sky"). When that house burned down, the Graystones relocated to this ultra-modern estate (CAP: "Know Thy Enemy", "Ghosts in the Machine", "Things We Lock Away").

Complete with integrated home automation technology, the Graystone Estate is managed by Serge, a robotic servant. Comprised of at least three levels, two above ground and a basement level, the house sits on the waterfront of Caprican Bay. Other amenities include a tennis court with computerized features, including line sensors and the auto-umpire, and an elaborate lab set up where Daniel Graystone can continue his work outside the office. Though this is not the place where holoband technology was created, it is where the MCP chip is integrated with the U-87 Cyber Combat Unit chassis, becoming the ostensible birthplace of artificial life in the Twelve Worlds (CAP: "Pilot", "End of Line").

Fifty-eight years before the Fall, Clarice Willow and her husbands Olaf and Nestor Willow break into the Graystone Estate in order to retrieve a holoband they believe Amanda Graystone has stolen. Triggering home security systems - including emergency barricades and Serge himself - the Willows shoot and incapacitate the servant robot and attempt to break into Daniel's lab. Tapping into the integrated computer system, Nestor Willow is successful in raising the security doors, but the trio is stopped by the robotic form of the Graystone's daughter, Zoe (CAP: "Here Be Dragons").

In the aftermath of the incident, Nestor Willow is dead and Graystone Industries lawyers and personnel enter the grounds to preserve the crime scene. They are interrupted, however, by Global Defense Department agents who accuse the Graystones of belonging to the same terror group as the Willows. Daniel and Amanda flee the scene and work to clear their names. Ultimately the Graystones are cleared of all charges and return to their home where Baxter Sarno interviews Daniel about the events leading up to the attack on Atlas Arena (CAP: "Apotheosis").

A digital version of the Graystone Estate exists in Daniel Graystone's personal virtual space. Here he and Amanda are able to visit with Zoe Graystone's avatar with all the comforts and amenities of their real home (CAP: "Here Be Dragons").

The Graystone Estate is a real location in the pilot episode of Caprica, located at 6955 Isleview Rd, West Vancouver, British Columbia, near Lion's Bay. When the series was picked up for a full season, the location was recreated as a set with minor changes. On 4 August 2010, the property was listed for sale at $11,980,000.00 CDN.[citation needed]