Philomon is a technician working at Graystone Industries during the development of the U-87 Cyber Combat Unit on Caprica in the years leading up to the Cylon War.

Unaware of the presence of the Zoe Graystone avatar within the prototype U-87, Philomon intuitively refers to the robot in the feminine, treating it with a respect and reverence not shared by his coworker, Drew Tanner. Having worked on the U-87 during its initial design and construction phases, Philomon is tasked with the maintenance and upkeep of the prototype - while also working with Daniel Graystone to solve technical problems with the (stolen) MCP (CAP: "Rebirth, "Gravedancing").

Personally, Philomon struggles at finding a romantic connection, even finding it difficult to meet women in the virtual world. Philomon's sexual frustrations manifest in his interactions with the U-87, often speaking to it as though it's a romantic interest, even dancing with the robot during a motion analysis test of its limbs. Developing an attraction to Philomon over the course of these interactions, Zoe Graystone as the U-87 initiates contact with him through the virtual dating site, V-Match. Taking on the guise of "Rachel", Zoe makes a date with Philomon and arranges to meet him in the V-Club (CAP: "Know Thy Enemy).

Though Philomon is at first shocked by Rachel's close resemblance to Zoe Graystone, he quickly reciprocates the attraction, stating that he believes Zoe Graystone "had principles". Taking Rachel on several virtual dates - including a simulated Viper flight, Philomon grows closer to Rachel, despite not being able to see what she really looks like. Though Zoe is using her interaction with Philomon as part of a plan to escape Caprica to Gemenon, her persona as Rachel inspires him to solve a major problem in replicating the MCP chip and mass producing Cylons. With new insight, Philomon brings his theory to Daniel Graystone who dismisses Philomon, ordering him to delete the MCP. Neither men are aware, however, that doing so would also delete Zoe in the process (CAP: "The Imperfections of Memory", "Ghosts in the Machine", "End of Line").

Aware of her father's plan to delete the MCP, Zoe is forced to escalate her plan, directing her best friend Lacy Rand to meet Philomon in the real world, claiming to be Rachel. She then instructs Lacy to stun Philomon and steal the U-87 from Graystone Indsutries. The plan, however, is interrupted and Zoe is forced to reveal herself to Philomon as both Rachel and Zoe Graystone in the form of the U-87. Stating that it doesn't matter what she looks like, Philomon agrees to help Zoe escape, then double-crosses her, triggering a security alarm. Her very existence at stake, Zoe attacks Philomon, tossing him into a concrete pillar and killing him before making her escape (CAP: "End of Line"). 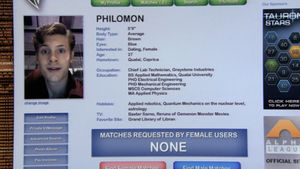