For information on this character's Original Series counterpart, see Ila.

Carolanne Adama is the former wife of Admiral William Adama, mother of Lee "Apollo" Adama and the late Zak Adama.

The Adamas' marriage was challenging from the start, as William Adama was often reassigned from base to base.

Her father was friends with an important member of the Defense Subcommittee; it was partly through this connection that her husband was able to reinstate both himself and Saul Tigh in the Colonial Fleet after their post-war furlough (TRS: "Scattered"). Since William returned to the Fleet twenty-three years before the events of the Miniseries (Sources:Adama's Dossier), it stands to reason that he and Carolanne were married some time before that.

Carolanne knew Bill's longtime friend Saul Tigh and his wife Ellen. Ellen would later remark that Lee was the spitting image of Carolanne (TRS: "Tigh Me Up, Tigh Me Down").

Carolanne suffered mood swings that upset the others in her family, according to her oldest son, Lee. Later drinking binges after the divorce prevented her from fulfilling (and later apologizing for) promises she failed to keep. Lee Adama believed that, while his father loved his mother, the reverse was not true (TRS: "A Day in the Life").

Adama and her husband had little contact since their divorce. At the time of the Cylon Attack, Lee Adama tells his father that she is getting married to someone else (TRS: "Miniseries").

It is presumed that Carolanne Adama perished in the Cylon attack. William Adama takes the occasion of his wedding anniversary each year to recollect his late ex-wife's memory (TRS: "A Day in the Life"). 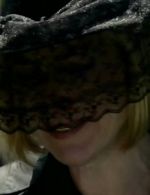 A flashback image of Adama at Zak Adama's funeral by an uncredited actress in "Act of Contrition."