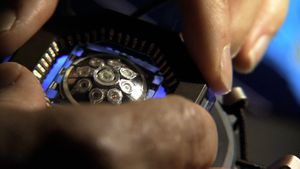 A close-up of the MCP in the hands of Daniel Graystone.

The Meta-cognitive Processor (MCP) is an advanced central processing unit developed by Tomas Vergis of the Vergis Corporation on Tauron, intended to bring higher brain function to cybernetic life forms.

Some 58 years prior to the Fall of the Twelve Colonies, the MCP is created by the Vergis Corporation at its labs in Tauron City in a bid to win the Cyber Combat Unit contract from the Caprican Government. Despite the fact that it never works for Vergis scientists, the chip is stolen by members of the Ha'la'tha for Joseph Adama, who in turn deliver the chip to Vergis competitor Daniel Graystone of Graystone Industries. Having lost his daughter Zoe in the recent MLMT bombing in Caprica City, Graystone uses the stolen chip in a bizarre experiment to bring his daughter back to life. Transferring a holographic avatar of Zoe onto the chip, Graystone then loads the MCP into the chassis of one of his own company's robots, a U-87 "Cylon" (CAP: "Pilot", "The Imperfections of Memory").

Though Graystone believes the experiment is a failure, the chip enables the U-87 prototype to test at sentient levels, performing well in battle simulations. Despite this success, however, only the original chip and the original U-87 chassis demonstrate this level of aptitude, an inexplicable bonding of the two nominally isometric components. Unbeknown to the scientists at Graystone Industries and Graystone himself, the bond is due to the presence of the Zoe Graystone avatar within the MCP and U-87 body (CAP: "Pilot", "Rebirth"). 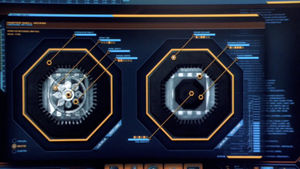 A computer diagram of the MCP and its specs.

Unaware of Zoe's presence as the U-87, Graystone continues to work on the unit, striving to solve the problem and deliver 100,000 functional robots to the Caprican Government within a short deadline. Working with Cyrus Xander and his assistant Philomon, Graystone ultimately concludes that the chip contains anomalies that, while giving the U-87 a psychological presence, needs to burned off the MCP "like a cancer." With the MCP wiped clean of any existing anomalies, the Graystone scientists can finally create clean copies. Fearing the deletion of her avatar and thus potential death herself, Zoe steals a company van and escapes Graystone Industries within her robot body (CAP: "End of Line").

Pursued by Caprican authorities, Zoe drives her van into a barricade, causing an explosion that destroys the U-87 body. Collecting the remains of the U-87, Graystone Industries wipes the chip and duplicates it, producing a line of functional robots that, while not showing sentient-level intelligence, prove useful war machines (CAP: "End of Line", "Unvanquished").

Based on this original MCP, Graystone Industries successfully designs, markets and sells numerous Cylon models throughout the Twelve Worlds (CAP: "Apotheosis"). Following this initial iteration, Graystone Industries launches an upgraded MCP designed by Doctor Beka Kelly. It is with this software that the Cylons ultimately rise against humanity, initiating the protracted and bloody Cylon War (Blood and Chrome).