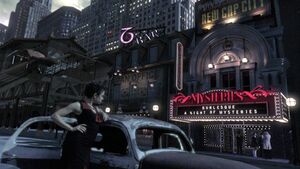 Mysteries was a nightclub in the holoband game environment known as New Cap City. Mysteries featured a show hosted by Cerberus who espoused riddles and posed questions to select audience members. Those audience members who failed to answer correctly were derezzed and banned from New Cap City permanently.

Tamara Adama visited Mysteries looking for answers, leaving her signature in the lobby. Her father, Joseph Adama - in search of Tamara - entered the nightclub with Emmanuelle, inadvertently drawing attention to himself and becoming the target for Cerberus' questioning. Refusing to even hazard a guess, Adama was ejected from the club. However, upon discovering Tamara's signature in the lobby, Adama used amp and forced his way back into the club, opening fire on the patrons. Adama held a weapon to Cerberus' head and forced him to give him information on Tamara, though the host knew very little.

Mysteries' happy hour was on Wednesdays (CAP: "Ghosts in the Machine").