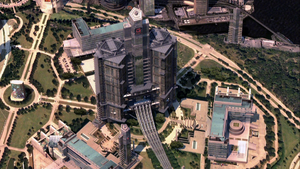 Based out of a sprawling campus located in Caprica City, Graystone Industries was founded by Daniel Graystone following his involvement with the MicroCap corporation (CAP: "There is Another Sky"). Described by competitor Tomas Vergis as a toy maker, Graystone and his company were responsible for the introduction of holobands and the virtual world to the Twelve Colonies of Kobol, selling millions of units and making Graystone Industries a household name on Caprica (CAP: "Pilot", "Know Thy Enemy"). By some 53 years before the Fall, however, Graystone Industries had entered into cybernetics, at first building simple robots before designing the U-87 Cyber Combat Unit - a robot soldier intended to be sold to the Caprican government (CAP: "Pilot"). 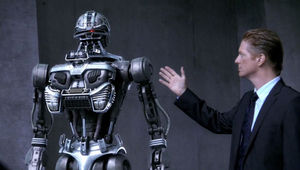 Daniel Graystone and the first of "a new race that will walk alongside us."

Following the fabrication of the U-87 chassis and acquisition of the military contract from the Caprican Ministry of Defense, the Cyber Combat Unit project stalls - falling five years behind schedule and going half a billion cubits over budget. While the creation of the robot chassis itself is complete, the creation of a functioning artificial intelligence to drive that chassis proves problematic. With the media playing up the delays and cost overruns, the Caprican Prime Minister begins to apply pressure to Graystone Industries; threatening to take the project off world.

A major breakthrough occurs when Graystone Industries' competitor the Vergis Corporation cracks the artificial intelligence problem with the development of the meta-cognitive processor, or MCP. While Vergis is thought to have been years behind Graystone Industries in the field of robotics, the creation of the MCP brings them into play for the Cyber Combat Unit contract.

Under pressure and mourning the recent loss of his daugher Zoe, Daniel Graystone secretly enlists Joseph Adama, due to his ties with the Ha'la'tha crime syndicate, to steal the MCP from Vergis labs on Tauron. While the theft results in the deaths of two Vergis Corporation employees, the endeavor is successful and Graystone's U-87 begins exhibiting human-level sentience with Vegis' MCP chip installed. After a successful demonstration for Minister of Defense Joan Leyte, Graystone Industries secures its deal with the Caprican Government and production of 100,000 units of U-87s, dubbed Cybernetic Life-Form Node by Graystone, begins (CAP: "Pilot", "Rebirth"). 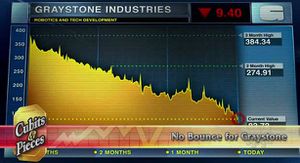 Despite securing the contract, Graystone Industries stock nose-dives when Daniel Graystone's deceased daughter is publicly outed as a member of the Soldiers of the One terrorist organization and linked to the bombing of MagLev train #23 (CAP: "Rebirth"). Due to Zoe Graystone's name recognition, Graystone Industries and its holobands become associated with the moral decay of Caprica, sparking public outcry against the company and its founders (CAP: "Reins of a Waterfall").

The financial future of the company is further endangered when Graystone personally pledges on Backtalk with Baxter Sarno to divert all profits from holoband sales and V-world space to funding anti-addiction efforts - affecting sixty percent of Graystone Industries' revenues (CAP: "Gravedancing"). In response, the board of directors debates removing Graystone from the board, despite Cyrus Xander's recognition that Daniel himself "is the brand." Daniel Graystone counters with a demonstration of the U-87's unique capabilities, arguing that sales for both military and civilian applications would sustain the company and affect society far more profoundly than the holoband (CAP: "There is Another Sky"). The demonstration momentarily secures Daniel's future as CEO, but continuing difficulties in the production of Cylons and erosion of the company's stock draws the attention of Tomas Vergis, seeking retribution for the deaths of his employees (CAP: "Know Thy Enemy").

The company's troubles worsen when the prototype Cylon kills Graystone Industries scientist Philomon and escapes from Graystone labs. Believing Graystone Industries has lost control of the project and receiving overtures from Tomas Vergis, the Caprican Ministry of Defense withdraws the Cyber Combat Unit contract and grants it to the Vergis Corporation instead. With significant capital behind him, Tomas Vergis is installed as CEO of Graystone Industries and Cylons finally begin leaving the assembly line (CAP: "End of Line", "Unvanquished"). 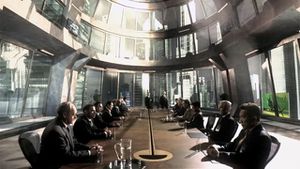 While Tomas Vergis' management of Graystone Industries improves the company's image, its former CEO is plotting his return. Allying himself with the Ha'la'tha, Daniel Graystone uses his knowledge of his former employees to systematically blackmail the Board of Directors. Though one member of the board, Cornell Gast, is pushed to suicide, Daniel Grasytone is successful and soon re-installed as CEO (CAP: "Retribution", "Things We Lock Away"). Under Daniel Graystone's renewed leadership and with the Ha'la'tha operating from behind the scenes, Graystone Industries begins the development of Grace - an extension of holoband technology that will ostensibly resurrect the dead in the virtual world (CAP: "False Labor").

When the development of Grace proceeds slowly, Daniel Graystone comes under pressure and threats from his new allies the Ha'la'tha and the Guatrau (CAP: "False Labor"). The situation is further complicated when Graystone discovers that the Ha'la'tha has begun skimming Cylons from the production line for sale to the Soliders of the One cult on Gemenon (CAP: "The Dirteaters"). Nevertheless, under Daniel Graystone's leadership and following a thwarted assassination attempt by the Ha'la'tha and the STO terrorist attack, Graystone Industries rebounds tremendously and spearheads the integration of Cylons into Colonial society (CAP: "Apotheosis"). 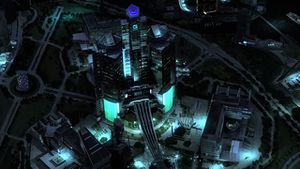 Following the Cylon rebellion and beginning of the Cylon War, Graystone Industries' influence fades and the company becomes infamous. Though work on Cylons continues into the war, the company is seen as responsible for creating the machines that seek humanity's destruction. Ten years into the war, a Graystone Industries software engineer, Dr. Becca Kelly, unsuccessfully attempts to skew the war in the Cylons' favor by providing them what she believes to be classified information about Colonial Fleet positions (Blood and Chrome).

By the resolution of the Cylon War and the subsequent decades, Graystone Industries' impact on Colonial society is all but forgotten and holobands - like all networked devices - fall into disuse (TRS: "Miniseries").