Ruth is the mother of Shannon Adama a.k.a. Shannon Adams, and mother-in-law to Joseph Adama. Her grandson, William Adama, refers to her by the affectionate term "Tsattie".

At some point in her life, Ruth was employed as a shooter/assassin for the Ha'la'tha (CAP: "Here Be Dragons").

In 58 BCH, she lives with Joseph Adama and his son, William, on Caprica after the terrorist bombing of Maglev 23 claims both her daughter's and her granddaughter's lives. She has repeatedly attempted to convince Joseph to tell his son William about their true heritage as Taurons, eventually succeeding in this (CAP: "Pilot").

After Amanda Graystone announces publicly that her daughter Zoe Graystone was involved in the bombing of Maglev 23, Ruth supports Joseph's plan to have Amanda assassinated by his brother Sam Adama, believing in blood for blood (CAP: "Gravedancing").

Ruth notes that Evelyn is good for Joseph, implicitly giving Evelyn her blessing to pursue a relationship when informing Evelyn that both she and Willie will be staying with her sister for a while (CAP: "False Labor").

Ha'la'tha member Francis is sent to Joseph's apartment to assassinate him after the Guatrau decides to have the Adama brothers killed for smuggling U-87 Cyber Combat Units to Tauron against his wishes, but Ruth kills Francis with a meat cleaver to the back. Ruth then keeps watch in the apartment with a gun while Joseph, Evelyn and William go to Goldie's, a local restaurant, to retrieve fake identity cards so they may go into hiding (CAP: "Here Be Dragons").

Following the death of her grandson in a shootout at Goldie's, Ruth is disgusted that the Guatrau's supporters' vendetta would extend to a child. She continues to be part of the Adama family after Joseph marries Evelyn and has another son, also named William (CAP: "Apotheosis"). 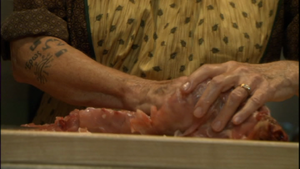 Ruth's tattoos on her right upper forearm, signifying her children and grandchildren (CAP: "Reins of a Waterfall" deleted scene).