By 7358, Apollo receives a promotion to Major and still lives with a teenage Boxey, who expresses his desire to become a Warrior as he becomes eligible for training (Battlestar Galactica: Death of Apollo #1 — #5).

The Many Deaths of Apollo 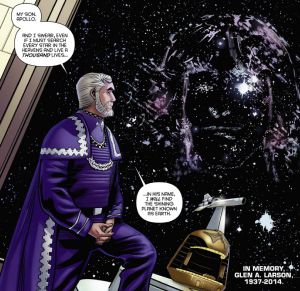 Following the discovery of the long-lost ship Taurella and the psionic Countess Sephoni, Major Apollo leads a recon flight to the coordinates that she divined were of Earth. The divination had been uncovered as a trick by the Cylons, leading to both wingmen's deaths and his subsequent injury and capture by the Cylons (Battlestar Galactica: Death of Apollo #1 — #2).

Apollo is written off for dead by Commander Adama, leaving the crew, family and friends in various degrees of mourning. Captain Starbuck takes it poorly, nearly killing Sephoni in the process before being subdued by security and after a stern talking to by Adama—expressly forbidding Starbuck from pursuing any search-and-rescue attempts (Battlestar Galactica: Death of Apollo #2 — #3).

The gifted psionic Xam divines Apollo's presence and, with a clandestine team lead by Starbuck, Athena and Sephoni, recover Apollo. Upon his return, Dr. Salik discovers a micro-fissure within Apollo's head caused by the trauma of the battle, thus rendering him unable to actively serve on the front lines (Battlestar Galactica: Death of Apollo #3 — #4). In order to reduce the risk of a stroke-event or brain hemorrhage, he is assigned to duty in core command and has a tumultuous time adjusting to the new role, despite assistance by Sergeant Omega and Doctor Madusa (Battlestar Galactica: Death of Apollo #5).

Apollo's return allows the Cylon super basestar to track the Fleet, resulting in a pitched and fierce battle for the fate of humanity the likes not experienced for yahrens. During the pitched battle, Apollo and Athena work in tandem to organize the civilian ships' escape, while Sephoni divines a weakness in the super basestar's shielding that would allow a well-placed fusion missile to make its kill. Unable to communicate this due to Cylon jamming, Apollo makes the fateful decision to embark on his last Viper mission to deliver the kill-shot.

After making this kill, the basestar's explosion damages his Viper's controls, inexorably locking him into a collision course with a nearby star and sealing his fate. Outliving him are his father Adama and his sister Athena (Battlestar Galactica: Death of Apollo #6). 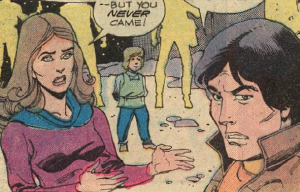